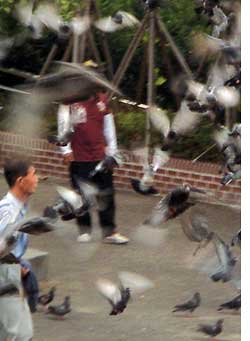 In Korean folklore--as elsewhere--the pigeon is a messenger. But today, the domestic pigeon has been designated a harmful creature in Korea and will be hunted down. The country's Ministry of Environment gave advanced notice of legislation on the pigeons on March 28.

Domestic pigeons will be declared "detrimental wildlife," which also includes animals that damage fruit trees and crops, such as magpies and wild boars. According to the new designation, pigeons will be classified as vermin and heads of local government asked to authorize their capture late this year.

For many Koreans, domestic pigeons have become an object of evasion and disgust with feathers and their excrement dirtying buildings, including major cultural assets. "The pigeons on the streets are dirty, abundant and threatening,'' said Han Joo-hee, a Seoul office worker. They make the street dirty and get hurt by the trash there, said another Ha Jong Ho, another Seoul resident.

In recent times,Domestic pigeons have been called "chicken-pigeons'' due to their fatness or "mouse-pigeons'' because of their dirtiness.