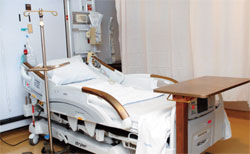 Copper utensils have been used in Indian households since ages due to the anti-microbial properties of the metal. It has now been found that copper alloys can also help reduce infections in hospitals drastically.

It is estimated that nearly 100,000 billion people die of healthcare-associated infections in the US, while 10-30 per cent patients develop infections in Indian hospitals and nursing homes. Researchers from Medical University of South Carolina, Memorial Sloan-Kettering Cancer Center and Ralph H Johnson Veterans Affairs Medical Center in the US suggest copper could be used to control these infections.

To test the efficacy of the metal, they used copper alloys, registered with the US Environmental Protection Agency, on six frequently touched objects—bed rails, bed tables, intravenous poles, chair arms, call button and monitors—in the Intensive Care Units (ICU) of three hospitals. At the end of the study, it was found that copper fixtures reduced the infections in the three ICUs by more than half. Findings of the study were published in Infection Control and Hospital Epidemiology in May 2013.

“There is enough scientific evidence from clinical trials that evaluate the efficacy of copper alloys in reducing bacterial load,” says study co-author, Michael Schmidt of the department of microbiology and immunology at Medical University of South Carolina. M C Yadavannavar, professor of community medicine at Shri B M Patil Medical College, Bijapur, says a few Indian hospitals, like AIIMS in New Delhi and PGI in Chandigarh, are embracing antimicrobial copper in ICU design.