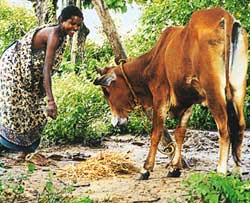 Global warming is a major concern due to increase in atmospheric concentration of greenhouse gases, mainly due to anthropogenic activities. Methane is one of the most harmful greenhouse gases and India and China have been accused of being the largest emitters of methane. Indian scientists on the other hand have been trying to make more accurate estimations of methane emissions from livestock and agriculture. "The paper gives credence to earlier claims by India that it emits much less methane from livestock.The total methane emission from livestock in India is almost 30 per cent less than what was estimated," says Mahadeshwara Swamy of the Central Leather Institute of India, Chennai, and the lead author of the paper.
ipcc calculates the amount of total methane emission by multiplying a global average of methane emissions per animal with the number of cattleheads in a country. In its calculations, it takes into account the percentage of feed intake that gets converted to methane, called the methane conversion factor. Feed intake is calculated for each animal type using parameters including age, body weight, dairy, non-dairy, milk yield, feeding level and others. But it does not take into account regional variations and overestimates methane emission levels, argues a paper published in the November 25 issue of Current Science (Vol 91, No 10).

"The global average methane coefficient method to calculate methane emission in India will not work as it does not aptly reflect the country's conditions. A global average is not based on data from all the states. Much as these default values would be useful for countries with a small animal population, for a country like India with a large animal population that varies in size and physiological functions, it is desirable to develop emission coefficients based on data from all the states," says Swamy.

Indian cattle have a different genetic makeup, compared to those in developed countries. They are smaller in size with lower body weight, and are adapted to different climatic conditions. Besides, their nutrient requirements vary, just like the type of animals, feeding and animal husbandry practices. Indian farmers feed their cattle on crop residues, grazing and by-product concentrates, unlike the much healthier feeding habits of their western counterparts. ipcc does not take these factors into account in their measurements.
Country-specific methane emission factors were first developed in 1992 for the agricultural sector and improved thereafter. Emission coefficients were developed for different age group of ruminates--the key source category. However, these emission factors were not region-or condition-specific and varied depending on activity of the cattle. Efforts in India have since then been geared towards reducing the variations by taking into account more specific activity data like feeding and metabolism.

In India, livestock accounts for 78 per cent of the total methane emissions from the agricultural sector and 50 per cent of emissions overall. India has a per capita cattle population of 185 cattle/1000 people. Methane is produced during fermentation of feed in the stomach. It results in a 5-15 per cent loss of energy, which affects the productivity of cattle. It also accounts for a waste of Rs 2 crore of animal feed per day in India. The paper says that use of production-enhancing agents like antibiotics and halogenated compounds is impracticable in India. But replacement of roughages with molasses and other nutrient-rich local diet can be undertaken to improve productivity and reduce methane emissions.

Keeping methane in aerobic conditions and creating unfavourable conditions for its generation by turning the manure often can decrease methane generation by 30-40 per cent if properly followed, says Swamy.