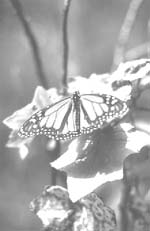 Mexican environmentalists have praised government audits on illegal logging in the protected reserves of migrating monarch butterflies. The Group of 100, the country's leading ecological advocacy group, said investigations by the environment ministry had found communities in the central state of Michoacan -- where the monarchs shelter in the winter -- had cut down more than twice as many trees as allowed. "It's the first time the federal authority has recognised that logging exceeds what has been authorised," poet Homero Aridjis, president of the group, said. "This is very important," he told a news agency.

The monarch butterflies have captured the imagination of environmentalists worldwide for their migration from Mexico to Canada and back. Generations born along the way instinctively find their habitats in the us , Canada and Mexico. The millions of butterflies that blanket the forests of Michoacan are a major tourist attraction from about October to April, when they start heading back up North. But unchecked ravaging of pine forests has deprived butterflies of their winter habitat, reducing the population by 50 to 80 per cent in ecological reserves where logging is supposedly controlled, the Group of 100 said. In a statement, it said 10 audits by environmental watchdog Profepa had discovered that four communities exceeded their logging quotas "seriously" and the other six slightly.