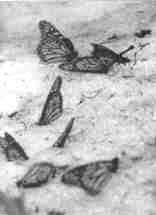 A rare sudden spell of snow - nearly 12 inches - in central Mexico, has driven millions of Monarch butterflies, which have their winter sojourn in Mexico, to a cold death. The distinct orange and black insects fly every year from their summer haunts in Canada across the expanse of US to spend their winter in specially built butterfly sanctuaries in Mexico. The spectacular clumps of orange and black coating the fir trees draws many visitors to the country. In the cold weather, the butterflies move little, preferring to clump together in giant nests of bodies so heavy that the fir trees droop under their weight.

The sad plight of the monarchs has raised furious voices of protest from the eco-groups of the three nations and also avid Monarch watchers. "Butterflies are falling from the trees," said Homerc, Aridjis, who heads the Group of 100, a Mexican environmental lobbying organisation. The last count has put the deaths at a high 20 million or nearly 33 per cent of the Monarch's winter population. Deforestation in sanctuaries has damaged breeding grounds, ruining the cover that allows them to survive bad weather, say the ecologists. It is feared that the large number of deaths would mean that there will be far fewer butterflies populating the US and Canadian gardens this summer.

The fragile insect is an important barometer of environmental degradation across the three countries. Monarch populations in the current years is steadily being decimated mainly due to agricultural pesticides that poison the flowers they feed on, deforestation of their mating grounds and also increasing urbanisation and pollution.