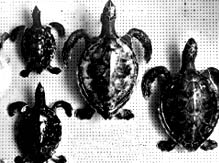 Poverty's black face crept in view yet again as hundreds of local poor, alerted to the fact that marine guards had left their posts, descended recently on the Escobilla beach -- a large turtle preserve where thousands of olive ridley turtles lay their eggs -- and absconded with the eggs and also massacred untold numbers of exhausted female turtles. Turtle leather and shell accessories command a good price in the market.

Due to an attack by a new guerrilla force in nearby Oaxaca, the guards had temporarily left the turtle reserve, giving the poachers a free run to make a mockery of the laws set by the government since 1990. "It is a catastrophe for the turtles," said a devastated Homero Aridjis, president, Group of 100, an environmental organisation in Mexico City.

Mexico's coast lines are some of the most important marine turtles' nesting grounds in the world and are used by seven of the eight types of sea turtles. Researchers have spent the past two decades trying to convince local communities of the need to preserve turtles. But with poverty ruling most of the populace, they are often looking for ways to make money and selling turtle eggs and skin make for lucrative deals. Observed Jose Vaughan, a fisherperson, "People don't steal the turtle eggs because they enjoy doing it but because they need to. The people here don't have work. They don't have anything."