Victim dies on way to hospital; she had angered influential landlords of her village 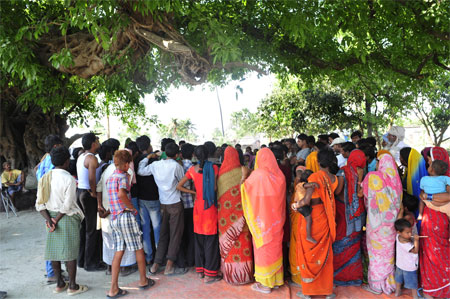 A 45-year-old activist, who had been protesting against irregularities in the implementation of the Mahatma Gandhi National Rural Employment Guarantee Act (MGNREGA) in her area, was gang raped near Mandai Khurd village in Muzaffarpur district on the night of March 27, the day of Holi festival. The victim died the next day while she was being taken to a local hospital.

The victim had reportedly became an eyesore for the influential landlords who have allegedly “hijacked” the rural employment scheme in the village using fake job cards. The activist (name withheld) was popular for her protests against the liquor mafia. The gang rape took place in a corn field when the victim was returning with her husband after meeting relatives.

Her husband was tied to a tree while she was forcibly carried away to a nearby field. The rapists reportedly tormented the victim for nearly half an hour. The victim's husband was later untied by the assailants and threatened with dire consequences if he approached the police.

Enraged by the gang rape and subsequent death of the victim, villagers blocked the highway for nearly four hours. Rinku Devi, district secretary of Akhil Bharatiya Janwadi Mahila Samiti, alleged that activists protesting peacefully against the incident were beaten by goons and that three female activists were injured in the protest on March 28.

“The tormentors stuffed bamboo and pebbles in the private parts of the victim. There were deep teeth bite marks on her entire body,” Rinku said.

Villagers are also suspecting the role of police in the entire incident. Villagers claimed that police is not taking action to nab the criminals. They also blamed police for focusing on maintaining law and order in the village instead of arresting those who committed the crime.

Second murder of activist in a week
This is the second killing of a MGNREGA activist in the district. In both incidents, the role of police has come under scanner. Last week, an advocate, Ram Kumar Thakur, was shot dead in Ratnauli village after he exposed a MGNREGA scam.

Police claim that family members of the rape victim did not report the incident to the local police station. News about the incident reached district police headquarters after protesters blocked the road. “We have constituted raiding teams to nab the culprits. Police would have been able to act swiftly if the victim family had lodged an FIR,” Arvind Kumar Gupta, additional superintendent of police, Muzaffarpur, said.

There was no arrest till the time of filing of the report. Keeping in the view the tension reigning the village, a contingent of police have been deployed.