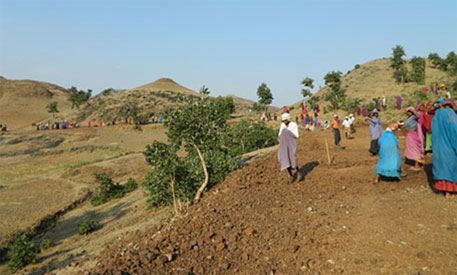 The rural job scheme, the Mahatma Gandhi National Rural Employment Guarantee Scheme (MGNREGS), which guarantees 100 days of unskilled job to rural households in a year, has been blamed by a number of economists for food price inflation.

But a new study by the Reserve Bank of India refutes these claims. It says that MGNREGS has not really contributed to food inflation.

The scheme was introduced in 2005 by the then Congress-led UPA government. It became eyesore for economists who said it increased rural labour wages and, therefore, input cost of food production. Even the RBI, in 2012, had said the scheme was the reason for double digit food inflation in the country. High inflation had persisted from mid-2012 to December, 2013. Since January, 2014, food inflation dipped significantly and was below 8 per cent in September this year.

Too limited in reach for impact
The RBI paper, “Recent Trends in Rural Wages: An Analysis of Inflationary Implications”, has been prepared by G V Nadhanael, research officer with Prices and Monetary Research Division of Department of Economic and Policy Research of Reserve Bank of India. The study started in 2012 observes that the coverage of MGNREGS is low to an extent that it fails to exert substantial pressure on food inflation. But at the same time the scheme has helped in raising rural wages, the report notes.

The study, however, states that the job scheme might have created significant impact on market wages in labour supplying states like Bihar, Chhattisgarh, Odisha, Madhya Pradesh, Uttar Pradesh and Maharashtra. In these states, wages under MGNREGS was higher than the rural market wage. It might have stopped rural migration and created pressure on rural wage market.

At the same time, the study says the scheme could be adding to inflation by raising wages or bringing rural market wage up to a level that pushed prices up. But because of limited reach and coverage of the scheme, it has had no direct impact in creating additional demand for work.

Changed rural labour profile and wages
The study shows that the scheme helped in raising rural wages but it should not be singled out for rising inflation. There are a number of reasons for rise in food inflation.

The study says that work participation rates (WPR) change also influenced inflation. It has been observed that there has been a significant decline in participation of women and youth aged 15 to 24 in the labour work force. This has affected demand and supply situation in the rural market and has also contributed to increased labour prices and farm input cost.

Short and long-run impacts of food price changes on poverty