Microorganisms can enhance the movement of carcinogenic hydrocarbons in soil, making them degrade at a quicker rate 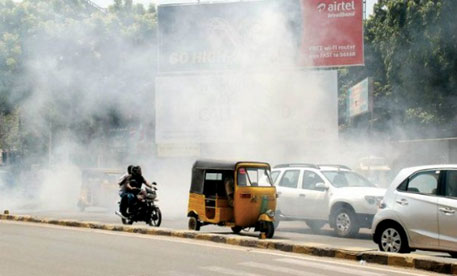 PAH or polycyclic aromatic hydrocarbons are a byproduct of fossil-fuel and biomass burning. These hydrocarbons settle and seep into soil, polluting it. They do not mix with water, take very long to degrade and cause cancer in people who eat crops grown on contaminated soil.

But a new study claims to have found a mechanism to remove them from the soil. The study uses ciliates, microorganisms found in soil. Ciliates cling on to PAH, make them diffuse and move through soil layers faster. Diffusion allows PAH better contact with other microorganisms increasing their prospect of biodegrading.

Ciliates have wavy hair-like bodies and they swim and crawl in wet environments. Typically, they are found in stagnant water in flower vases and puddles, feeding on bacteria. Researchers from Aarhus University, Denmark, led by Dorothea Gilbert, have found these motile microorganisms can act as “shuttles” to carry PAH with effective diffusivity about a hundred times more than their normal rate of diffusion.

The study has been published in the journal Environmental Science & Technology in March. For their experiment, the researchers used a microscopic slide with two concentric wells with a connecting chamber to allow diffusion. First, they filled the rings with chemicals and studied how fast PAH diffused through the small microscopic distance. Then they introduced ciliates and found that the transport of PAH became about a hundred times faster.

“Hydrophobic organic chemicals such as PAHs are passively taken up by the microorganisms by diffusion. Also, the larger the microorganisms, the faster they move. For bioremediation, this means that a high number of moving microbes may significantly enhance contaminant turnover,” says Philip Mayer, professor at the Technical University of Denmark, who took part in the study.

“The experiment is still in the laboratory stage, and there is a long way to go. We are yet to discover all the other species that could potentially be more effective than ciliates in diffusing PAHs. As of now, the findings lead us to an understanding that the more microorganisms in soil are nourished, the better the chances of degradation of harmful substances,” says Gilbert.