Company to reveal source code, but there is a catch 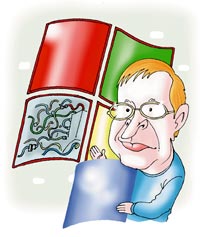 Microsoft has decided to share one of its most closely guarded trade secrets. But there is a catch.

The software giant will let governments and international organisations study its source code for Windows opera-ting systems, authorising them to improve their software security. The serious challenge mounted lately by open source operating systems like Linux appears to have forced Microsoft to take the step.

On the face of it, the move is a bold one by a company that has traditionally opposed the open source movement. Analysts, however, feel it is no more than a marketing gimmick.

According to them, what Microsoft will actually be doing is merely revealing the source code - the core of a software programme. It will not allow governments to modify it for specific needs. Instead, company engineers will use the feedback from governments and work with them to make improvements to security or add new features.A kit will also be made available to governments to make security software that is comp-liant with Windows.

Government agencies are reportedly more interested in cheaper open source software that can be tweaked and adap-ted to meet their requirements. Linux, for example, allows developers to freely modify and improve the product.

Currently, Microsoft is holding discussions with more than 60 governments and agencies including India, China and Japan. While the company is learnt to have revealed its source code to Russia, it has also reportedly offered the Indian government a peek at the same. It is in touch with the Union ministry of information technology in this connection.

Some ministry officials are of the view that there should be large-scale consultations with various user groups before a decision is taken. This would be crucial for defence and intelligence agencies, which require utmost information security. They feel that a study should also be conducted to ascertain how extensively Microsoft products are used in services such as railways, aviation, telecom and stock exchanges.

"We should not be conned by such a move," says an official, questioning the utility of a process whose code cannot be modified. At the same time, the ministry is not averse to having a look at the Windows source code, as "this opportunity will not come our way every day".

Several other countries are said to harbour reservations about using Microsoft products in sensitive areas. Among their worries are vulnerability of networks to deadly computer viruses such as Trojan Horse and probable illegal access to their database.

Microsoft has come under pressure from rivals offering freeware that can be copied and modified. Open source code underpins the products of Microsoft's fiercest competitors such as Apple Computer, International Business Machines (ibm) Corporation, Real-Networks and Sun Microsystems. Their strategy is to build their own proprietary software on a common platform. They can then focus more on fine-tuning the product, rather than bothering about the basic operating system.

The perceived benefits of open source software have prompted Germany, France, Finland, South Korea and the Philippines among others to try out the technology - often at the cost of Microsoft's Win-dows, which is replaced at least partly. Officials in these countries opine that not only does such software reduce costs, it enhances security too. Government officials also feel that its use could check software piracy and lead to growth of local software alternatives.