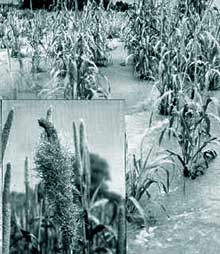 a hybrid variety of pearl millet resistant to downy mildew (dm) has been developed jointly by researchers at the International Crops Research Institute for the Semi-Arid Tropics (icrisat) in Patancheru near Hyderabad and the Haryana Agricultural University (hau) located in Hissar.

Caused by the fungus Sclerospora graminicola, dm is the most widespread disease of pearl millet, which is the fourth largest cereal crop in India after rice, wheat and sorghum. If plants are infected with dm at an early stage, their growth gets stunted and they die. Infection of plants at later stages results in failure of grain formation. Farmers in the arid and semi-arid tropics of South Asia and Sub-Saharan Africa, predominantly the poor ones, lose as much as 40 per cent of their millet yield to dm in a bad year.

The hybrid--hhb-67-2 -- is an improved version of the popular pearl millet variety hhb -67, which was developed by hau in the early 1990s. hhb -67 was originally resistant to dm but lost this ability over the years with successive breeding. The variety, however, remains extremely popular with farmers in Haryana and Rajasthan because it matures in just 65 days. Pearl millet is grown in over 400,000 hectares in these two states alone.

To develop the hybrid the researchers, led by icrisat principal scientist Tom Hash, added the gene for dm resistance to the male and female parental lines of the grain separately. Using what is called marker-assisted breeding technology, they subsequently tagged these genes with slices of dna to track whether the dm resistance is passed to subsequent generations by plant breeders. This technique would eliminate the possibility of farmers receiving seeds lacking defence against the fungus. All other desirable traits of hhb -67, such as short duration maturity, are also retained in the new variety.

The researchers said the hybrid could help avoid grain losses of almost Rs 30 crore for farmers in Haryana and Rajasthan. The figure is based on the assumption that a hectare yields 800 kg of pearl millet, which commands a minimum price of Rs 3 per kg.

The Haryana State Varietal Release Committee approved the release of hhb 67-2 on January 14, 2005.