Fungus to weed out the plague of India's tea plantations 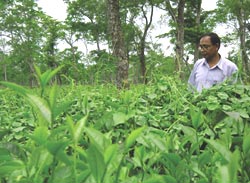 an exotic fungus may help save your favourite cup of tea. Scientists are planning to introduce a rust fungus to combat a weed that is strangling India's tea crops all over Assam and Darjeeling. However, the biological agent to kill Mikania micrantha may not be as good as claimed -- scientists assert the fungus may run amok and kill other plants.

Farmers lose about 30 per cent of their profits to control M micrantha, called the 'mile-a-minute' weed. "At times, the entire crop is lost," says Narender Kumar Jain, secretary of the New Delhi-based International Society of Tea Science. "The plant can grow at a phenomenal rate. In the monsoon season its growth is like seeing a green tidal wave coming down the hills," says Sean Murphy of the uk-based cabi Bioscience -- the company promoting the fungus.

M micrantha was introduced in India during the Second World War to camouflage airfields; but in the absence of natural enemies it spread uncontrollably. In southern parts of India, the weed also creates havoc in teak and eucalyptus plantations.

At present the only solution to the problem is the use of chemicals or armies of workers. But this is not always feasible because chemicals can only be used early in the growing season to avoid contamination of the crop's leaves. Therefore, scientists were searching for a biocontrol agent.

After a seven-year long search, Murphy's team has zeroed in on the rust fungus Puccinia spegazzinii, which is said to have controlled the weed in its native areas of South and Central America. The fungus has been delivered to India after undergoing tests in the uk. At present it is in quarantine; but will be soon released. If successful in India, it would be marketed to China, Indonesia and Malaysia.

Indian experts are not very forthcoming about the development. "It is very easy to remove the weed manually. The fungus may end up being another invasive alien species," says D C Choudhary, director of research, Tea Board of India, Kolkata. Caution is a must, as foreign organisms are said to be carriers of pathogens.

"P spegazzinii should be tested for all agroclimatic conditions, as tea is grown in many parts of the country," asserts B D Kaushik, head, department of microbiology, Indian Agricultural Research Institute, New Delhi. He says it is a must to find out its other victims (alternative hosts) as regards to India. If they are readily available, the fungus may thrive on them instead of attacking the weed.