...before this SUV can come clean 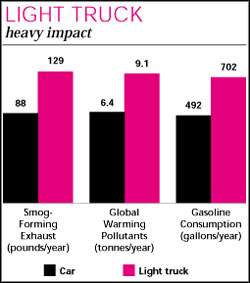 does a marginal improvement in fuel economy make a vehicle green? This is the controversy surrounding a recent proposal of the Bush administration. The proposal aims to increase the fuel economy -- distance covered by a vehicle per unit of fuel -- of sports utility vehicles (suvs), minivans and light trucks by around seven per cent. If the proposal is implemented, auto manufacturers would have to increase the fuel economy of their vehicles to 22.2 miles per gallon from the existing 20.7 miles per gallon by 2007-end.

This proposal has received a lot of criticism from environmentalists, who contend it is not going to induce automobile companies to become ecofriendly. "The Bush administration is being irresponsible, as they are failing to make the auto companies use existing technology to cut pollution," says Daniel Becker, a top energy specialist of the us.

Ironically, the proposal demands even less than what the companies have themselves committed to achieve. Ford Motor Corporation has pledged a 25 per cent improvement in fuel economy of its suvs by the middle of this decade and General Motors and Daimler Chrysler ag have said they would follow suit.

The low fuel economy and high pollution emissions from suvs have become issues of intense scrutiny for us policy makers for a decade. Today light trucks and suvs account for 50 per cent of new passenger vehicle sales in the us, thereby making it difficult to improve air quality, reduce greenhouse gases and decrease oil imports. Compared to a normal car with a fuel economy of 27.5 miles per gallon, suvs are required to meet a fuel economy of 20.7 miles per gallon. Moreover, according to a study conducted by the us-based Union of Concerned Scientists, suvs spew 30 per cent more carbon monoxide and hydrocarbons and 75 per cent more nitrogen oxides than cars.

Proposals to improve the fuel economy and emissions from suvs have long faced stiff opposition from the us auto manufacturers, labour unions and sympathetic lawmakers. Some experts fear that by proposing a mere increase in the fuel economy of suvs, without making the emission standards for these vehicles stricter, lawmakers are only adding to the problem of pollution. Higher fuel economy of suvs will become much more lucrative to an average consumer. Therefore, this half-cooked proposal of the government might increase the sales of suvs. Moreover, till now no serious efforts have been made by the manufacturers to reduce the emissions, which if done will increase the cost of suvs and therefore, reduce its sales.