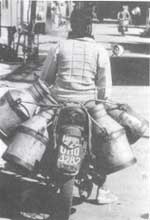 L N MODI, the managing trustee of the Bharatiya Cattle Research Foundation, Delhi, said that adulteration of milk is on the rise. Speaking at a press confer- ence in Delhi, he informed that in 1996, as many as 900 cases of adulteration were recorded in Meerut, Faizabad, Agra, Bareilly and Varanasi. According to the managing director of Vinal Dairy, jodhpur, as much as 90 per cent milk in jodhpur is adulterated.

Common adulterants include a cocktail of caustic soda, urea, refined oil, salt, sugar and starch. They are blended in such a way that even a lactometer (gadget used for testing quality of milk) fails to detect the adulteration. "The more unscrupulous milk suppliers even add detergents, poster colours, zinc oxide, lead and organic solvents," said Modi. According to Soren Choksi, an industrialist from Vadodara, Gujarat, "Smallscale industries producing synthetic chemicals have registered stupendous growth in last few years as people are using these chemicals in milk." The National Dairy Research Institute, Karnal, Haryana, has designed a new lactometer and it is hoped that it will be sensitive enough to detect adulteration in milk.