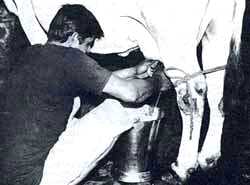 MANY a cow or female buffalo that is unable to produce milk has ended up in a slaughterhouse. But now, there is hope for these blighted creatures. A team of scientists led by R S Ludri of the National Dairy Research Institute (NDRI) in Karnal has not only succeeded in making such animals lactate but has also made them do so without undergoing pregnancy.

Though exotic and cross-bred dairy cows have been made to lactate with hormone injections, this is the first effort that has succeeded with indigenous breeds. Moreover, the NDRI scientists used a lower dose of hormones.

But the NDRI scientists discovered that for indigenous cattle, equal doses -- 0.05 mg per kg of body weight -- of the two hormones can work. Ludri claims that this dose can also induce lactation 85 hours after it is administered, compared to at least a week in foreign therapies.


Studies undertaken by scientists at the G B Pant Agricultural University in Pantnagar, says Ludri, reveal that the milk produced by hormone-treated cows has a higher fat content. Interestingly, most of the buffaloes treated with the hormones also overcame breeding problems and became pregnant. However, Ludri does not rule out the possibility of the injected hormones finding their way into the milk.

Nonetheless, Ludri and his team have already taken their technique outside the laboratory and have injected hormone doses into 20 animals reared by farmers around Karnal.