Language>> public Places • The US 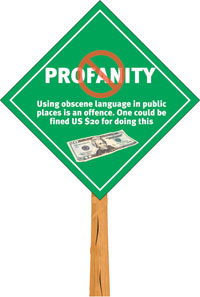 People in the small Massachusetts town of Middleborough better mind their tongue in public. Else they risk a fine. Last month, the town residents voted, approving a proposal to impose a fine of US $20 on profanity in public. Ironically, the ordinance actually decriminalises public profanity.

Since 1968, the town has had a bylaw that makes cursing in public a crime. But considering that the curser is rarely hauled to court, the ordinance merely fines those who use profanity in public.

The city officials say the aim is to reduce the sort of foul language used by teens in public parks. It is not meant to outlaw casual conversations or conversing in private, they say. But the American Civil Liberties (ACLU) argues that the government cannot prohibit public speech simply because it uses a few curse words. A number of writers and bloggers think the town is wasting its time worrying about a few bad words. Matthew Segal of ACLU says: “Some laws are good, some are bad, and some are just ridiculous.”