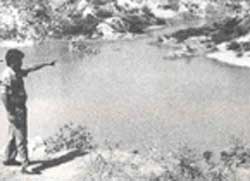 Plans are afoot to convert the Bhatti stone mines south of Delhi into a major drinking water source for the water-starved Capital. The gigantic stone mine pits, which were closed last year after protracted protests from environmentalists against the pollution caused by the stone crushers, might be converted into large reservoirs.

According to mining expert P K Jena, who set up the Bhubaneshwar-based National Resources Development Foundation, the pits can be converted into artificial lakes at a reasonable cost. The 2 pits hold water till a depth of 5-10 metres and Jena says that these alone can hold enough potable water to meet 50 per cent of the drinking water needs of Delhi. Says Umesh Kumar Verma, general manager of the Delhi State Mineral Development Corporation (DSMDC), "It is estimated that for every metre, there are about 2 million tonnes of water available from the pits." The corporation plans to set up a team of hydrologists, civil engineers and mining experts to create the vast lakes by widening the pits and strengthening the embankments.

Verma says that the primary source for the pits will be groundwater, adding that mining activity in several places in the area had already reached groundwater level. Besides, a DSMDC study has established that the water is of potable quality and needs minimum conventional treatment.