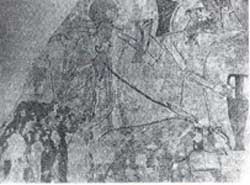 THE last of the woolly mammoths -- an ancient elephant look-alike -- disappeared somewhere in Siberia around 10,000 years ago. This widely accepted fact was challenged last year when new fossil finds from Wrangel island in the Arctic Ocean suggested a miniature version of the mammoth was very much around between 7,000 and 4,000 years ago, making it a contemporary of the ancient Egyptians. The evidence suggested that the creatures might also have been roaming the Mediterranean islands at the time.

Now, fresh support for miniature mammoths has surfaced. Israeli archaeologist Baruch Rosen has produced as evidence a painting from the tomb of a pharaoh that depicts a creature resembling the ancient tusker -- it is woolly, has long tuskers and is a dwarf (Nature, Vol 369, No 6479).

The creature portrayed, contends Rosen, cannot be a baby elephant because of its large tusks. Its skull is domed, as that of a mammoth. Moreover, its stance and the position of the tusks and trunk look more like a reconstruction of a living mammoth than of an elephant calf.

Furthermore, says Rosen, the beast is also probably unrelated to the modern mini-elephant of central Africa. For one, it looks different; for another, there is no documented evidence of any animal trade between that part of Africa and ancient Egypt.

However, Rosen admits that it is possible that as the painting also shows a man carrying two elephant tusks on his shoulder, the artist may only be caricaturing the true elephant as a dwarf, to indicate the ivory's source.