Science or pure imagination? Nanotechnology opens up unlimited possibilities which can revolutionise almost every field of human activity 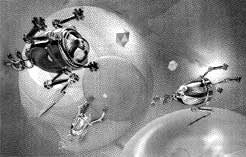 by the year 2020, factories far smaller than the head of a pin will manufacture everything from microwave ovens to sophisticated pistons. According to an American futurist, K Eric Drexler, the future belongs to the science of molecular design called nanotechnology ( Scientific American , Vol 274, No 4).

Nanotechnology is the manufacture of materials and structures with dimensions that measure up to 100 nanometres (one nanometre is the billionth of a metre). Its definition applies to a range of disciplines, from conventional synthetic chemistry to techniques that manipulate individual atoms with tiny probe elements. In the theory expounded by Drexler, methods employed for fabricating products on a nanoscale could eventually evolve into techniques for making molecular robots. In the course of a few hours, manufacturing systems based on Drexler's nanotechnology could produce anything from a rocket ship to minute disease-fighting submarines that roam the bloodstream. And like biological cells, the robots that populate a nanofactory can even make copies of themselves.

The renowned mathematician John Von Neumann, a pioneer in the field of artificial life, first ruminated about a machine that could make copies of itself. Later, nobel laureate Richard P Feynman talked about the ability to build things by placing each atom in a desired place. Drexler, though, can be credited with bringing wide exposure to this exciting idea. He holds the first doctorate in nanotechnology from the Massachusetts Institute of Technology ( mit) , us, and has written a series of speculative books on the 'unbounded' future that nanotechnology promises. He also founded the Foresight Institute at Palo Alto, California, which promotes his techno-utopist agenda. For two decades, he has been promulgating this peculiar vision of the future.

Finished goods in this new era could be had for little more than the cost of their design and the raw material such as air, beet sugar or an inexpensive hydrocarbon feedstock. Says Ed Regis, a science writer in his latest book Nano , that if we take Drexler seriously, 'nanosystems' will soon be able to transform anything -- dirt, toxic waste or moon rocks -- whatever we choose, atom by atom.

However, as even Regis admits, Drexler and his followers at the Foresight Institute have virtually no idea how any of this will be done. Although Drexler refers vaguely to gene-splicing tools and "scanning tunneling microscopes", -- devices that can map the shapes of single atoms -- he ignores the real work of engineering nanosystems, opting instead to ponder the social consequences of these imaginary technologies. Even if nanodevices are successfully designed, they may never be able to perform the complex tasks that Drexler has assigned to them. "This is not science -- it is show business," says Julius Rebek, a leading researcher in the chemistry of self-assembly at mit .

Despite his alienation from mainstream science and engineering, Drexler continues to expand his following, particularly among computer scientists. The trend towards miniaturisation is fuelling faith amongst computer scientists in a nanoist future. Twenty years ago, most computer circuits measured five microns in width. Today, some circuits are just one-quarter of a micron (a micron is a millionth of a metre) -- 250 nanometres across. Within the next decade, observers say, circuits could shrink to just 100 nanometres in width. That thickness would place the computer industry within the realm of nanotechnology.

Combining nanocomputers with molecular machines would allow almost any designed thing to be made from a variety of inexpensive raw materials, perhaps even dirt, sunlight and air. The cost per kg of goods produced by nanomanufacturing would equal the price of one kg of potatoes. In the resultant nanoworld, everyone would be wealthy because of the drastic reduction in the cost of goods. A jumbo airliner could be purchased for the current price of an automobile. A home-owner would pour acetone into a household manufacturing system, similar in appearance to a microwave oven and an hour later, out comes a computer, a tv set or a cd player.

Nanoist engineers seek to make complete structures from atoms in the same way nature builds trees, mountains and human beings out of molecular raw material. Nature is the ultimate nanotechnologist. What Drexler and his critics in the nanotechnology field are trying to do is to understand and imitate the workings of nature.

Whether or not Drexler's utopian ideas are correct, they come at a time when a variety of fields have reached stasis, says Seth Lloyd, professor and specialist in quantum computation, mit . "You do not come across many fields that have as bold a project as nanotechnology," he adds.