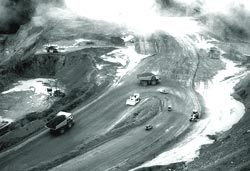 the Indonesian government's recommendation to grant 15 mining companies access to protected forest areas has come under fire from environmentalists and local people alike. The storm triggered by the proposal gathered force recently with the country's former environment minister, Sonny Keraf, joining in the protests.

At present, Indonesia's house of representatives is in the process of deciding whether or not to sacrifice 11.4 million hectares of protected forest areas to the mining industry. The companies have been aggressively lobbying to lower the present environmental standards. "During my tenure, I worked to achieve a level of environmental protection. I would like to support my successors to increase these standards, not erode them," pointed out Keraf. He called on parliamentarians to value forest conservation.

Indonesia's forests are facing a relentless industrial onslaught. The main culprit is mining activity that has led to rapid deforestation, thus threatening the country's biodiversity, and depriving its communities of their means of livelihood. Mining operations have also caused floods and landslides. Toxic mine waste disposal too is likely to be a major worry for future generations. It is noteworthy that under Indonesia's Forestry Act, open-pit mining is banned in protected areas.

Some Indonesian ministers have also expressed concern about the threat of foreign mining companies seeking international arbitration, if not exempted from the Forestry Act. "The government needs to stand up and protect the conserved areas of its own people, and not engage in a short-sighted scramble for foreign investments," asserts Longgena Ginting, executive director of non-governmental organisation, Indonesian Forum for the Environment.