Mining Bill gives people their due

It ensures that mine owners share profit with people 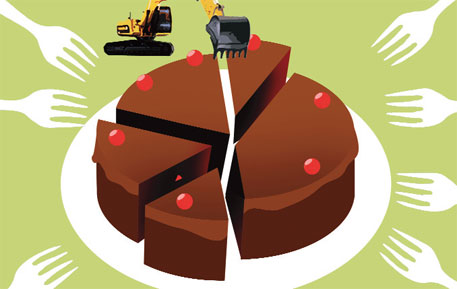 IT IS one of those rare instances where the government upholds people’s rights without giving in to pressure from industry. The Mines and Minerals Development and Regulation (MMDR) Bill, which was sent to the Parliamentary Standing Committee on Coal and Steel for an overhaul, retains the provisions that ensure mining companies share their profits with the affected community. The mining industry has long opposed the Bill that aims to replace the MMDR Act of 1957. The Bill was tabled in Parliament on May 7 and is expected to be discussed in the Monsoon session.

The Bill says companies that mine major minerals like limestone and iron ore will have to give the affected people an amount equal to the royalty they pay to the state government annually. For those mining minor minerals like sandstone and marble, states will decide the profit-sharing percentage in consultation with the proposed National Mining Regulatory Authority. For coal companies, the committee suggested preparing a royalty-based model, rather than sharing 26 per cent of their annual profit as proposed in the earlier draft.

“We were opposed to the concept of profit-sharing. If Parliament passes it then India should forget any foreign direct investment in the mineral sector,” says R K Sharma, secretary general of the Federation of Indian Mineral Industries. While activists are happy that the revised Bill retained the profit-sharing provision, they say coal companies should share an amount equal to the royalty, just like other major minerals.

The committee has also addressed a few other concerns of the activists about the Bill. It details the composition of the council set up to govern the District Mineral Foundation (DMF), which will receive funds accruing from the profit-sharing provision, and has expressed the need for increasing representation of the community in DMF council. This was one of the main recommendations of Delhi non-profit Centre for Science and Environment (CSE) in its report on profit-sharing released last year. “The composition of DMF council was skewed towards the government and industry in the earlier draft, which would have defied the purpose of this exercise,” says Chandra Bhushan, deputy director general of CSE. Bhushan, however, criticises the committee’s recommendation to include a local legislator in the council. In that case politicians will use the fund in their interest. Besides, the Bill does not specify how to spend the fund. This can be problematic, he adds.

Offering direct benefit to people from the minerals underneath, the Bill has a provision under which mining firms will allot at least one non-transferable share to each affected person. Accepting the Ministry of Panchayati Raj’s recommendation, the committee has suggested that the share be made “inheritable” and that the number of shares allotted to each person be linked with the area he has lost to mining.

Referring to the Samata judgement of the Supreme Court, which allows mining lease to cooperative societies in tribal areas, the committee has asked the Ministry of Mines to see if the cooperatives can be given leases for larger deposits, especially in case of minor minerals. It has recommended that the cooperatives should operate directly, without transferring the lease or subleasing. Ravi Rebbapragda, executive director of Samata, the NGO whose petition paved the way for Samata judgement, says, “It is important that the government provides the wherewithal of mining to these cooperatives.” The state mineral development corporation should offer support to these cooperatives, he says.

Certain provisions of the Bill still need to be ironed out. For instance, the Panchayati raj ministry had said the Bill should mention “consent” instead of “consultation” with gram sabha. The committee stated the term “consultation” be read as “effective consultation”. This gives mining firms leeway to ignore the views of gram sabha.