Mining in Goa: damage to the environment greater than loss of revenue

Illegal mining in Goa is being projected as a bigger scam than Bellary. While revenue losses from illegal mining has been estimated at about Rs 3,000 crore, the loss by way of damage to the environment and loss of livelihood has not been estimated.

Take the instance of Caurem village in Quepem taluka in south Goa. It has 2,000 families whose farms have been destroyed by illegal mines operating in the area. The silt from mining has entered the fields which now  resemble a large quagmire. Tukaram Velip, a resident says that the perennial stream that irrigated the village fields is polluted and agriculture has been completely destroyed. People are left with no means of earning their living, he says.

Most of the mines in the state are concentrated in four talukas—Bicholim in north Goa, and Sattari, Sanguem and Quepem talukas in south Goa. Activists say that an estimated 100,000 people living in the villages in these four talukas are affected. Besides loss of livelihood, they are also suffering from the adverse effects of air  noise and water pollution. “Mining has caused irreversible damage to forests, agriculture, fisheries and water aquifers,” says Abhijit Prabhudesai, member of Goyencha Xetkarancho Ekvott (GXE), a non-profit in Margaon city. He says the government has allowed mining even in forest areas despite the presence of wildlife.

The mining has also affected the Salaulim dam on the Salaulim river in Sangeum taluka, which supplies drinking water to half the state's population, besides providing water for irrigation and to industries. Over 20 mines are operating in the vicinity of the dam. Heavy silt has settled in the dam reservoir because of  mining. An official in the state water resources department admits that mining has damaged the state's water resources and says the department is now reassessing the life span of the Salaulim dam. The dam was commissioned in the 1970s with an expected life span of 100 years. A study conducted by The Energy Resources Institute (TERI) in 1994 showed excess iron and manganese levels in the Salaulim reservoir water. “This was when mining was at a much lower scale as compared to present level of mining. We have repeatedly asked the government to conduct a study on water availability and quality, but nothing has been done till date,” says Prabhudesai. 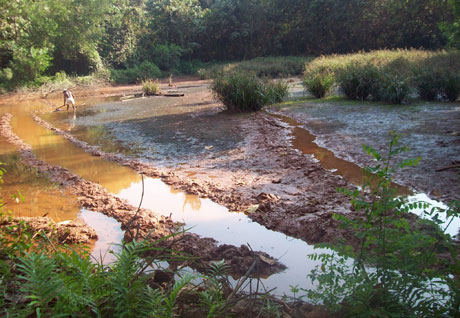 Superintending engineer with the water resources department, S V Prabhavalkar says there is little his department can do. “Mining is carried out under the laws of the Central government. All state laws are overruled by Central laws, and there is hardly anything we can do with limited powers and resources,” he says. “Our powers are limited to issuing notices to offenders. It is the office of the collector which is supposed to take punitive action,” he adds.

At present, Goa has 90 operational mines spread along the Western Ghats in an area of 150 to 200 sq km. Most of the legal and illegal mines are in forest areas.
Former Union minister A Raja who is now in jail in connection with the 2G spectrum scam, issued 169 environmental clearances for mines in Goa between 2005 and 2009 when he was the Union minister of state for environment, says Claude Alvares of non-profit Goa Foundation. He says this was a record in itself. Of these, 15 clearances were for mines inside the Netravalli wildlife sanctuary in south Goa. “Even the Union ministry does not have have copies of all these clearances. We could obtain only four, the rest are missing,” says Alvares.

Goa's additional chief principal conservator of forest, Shashi Kumar, however, denies that mines are operating in protected areas. “There were a few mines in the Netravalli and Madhei sanctuaries, but all of them were closed three years ago,” he says. He adds that the forest department also taxes mining companies that use forest roads to transport ore. “Earlier mine operators were charged at the rate of Rs 50 per metre of road length. We have now increased the fee to Rs 200 per metre,” he says. The permission to use the existing roads are subject to the condition that the roads would not be widened and trees would not be cut, says Kumar. 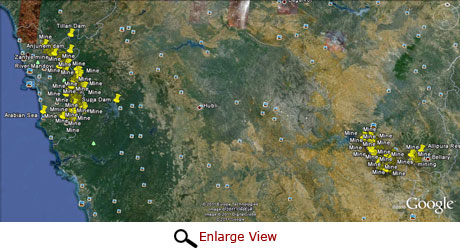 The mines in Goa are allowed to produce a total of 60 million tonnes of ore annually. The excavation ratio in Goa is 1:3 (for every tonne of ore, three tonnes of soil is extracted), which means ore extraction would lead to extraction of 180 million tonnes of soil every year. “Considering that most of the mines are in the Western Ghats, one can well imagine what would happen given the current pace of mining,” says Alvares. According to the records with the mines and minerals department, mining in the state touched 55 million tonnes in the financial year ending March 2011 as against 45 million tonnes the previous year. The mining business in the state is estimated to be worth Rs 16,000 to Rs 22,000 crore a year.

The rush for iron and manganese ore began in 2000 during the run up to the Beijing Olympic Games in 2008. With the price of iron ore touching $180 per tonne in the international market, Goa's mineral resources were over-exploited and even abandoned mines were reopened say activists.