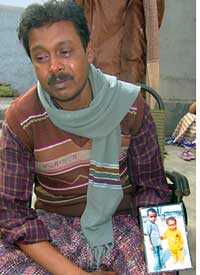 THERE are about 20 mines, mostly illegal, in Salanpur village in Burdwan district. The district has rich deposits of coal, fire clay and iron ore. One among the 20, a fire clay mine, claimed two young lives on February 8 in the West Bengal village. Four and five year old Suman Karmakar and Prasinjit Dutt fell into a mine close to their house.

They drowned in the seepage water that filled the mine. A magisterial inquiry has been set up to look into the matter and submit a report.

Villagers protested at the police station and demanded closure of the mines. The police arranged to backfill the mine with soil and level the area. A few villagers said they have been raising their voice against mining operations close to their houses but the miners and the administration had ignored them. "The mines are illegally operated, with the support of the police and influential people," alleged Ajoy, a villager. He also said collapse of underground mines, burning coal, poisonous gases and drowning incidents were common in the region, resulting in loss of cattle as well as human beings.

The block development officer, Soma Shaw, accused the villagers instead. She said villagers rarely ever cooperated in enquiries and did not disclose details of the miners or who the land belonged to.