POSCO to withdraw investment from Odisha? 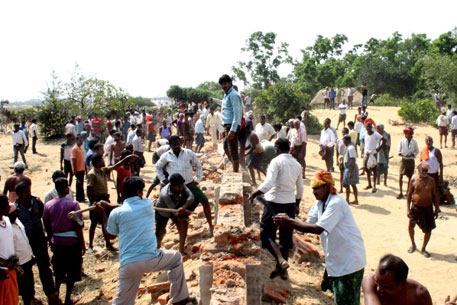 South Korean multinational company POSCO is reported to be “backing away” from its proposed $12 billion steel complex in Odisha, according to Bloomberg. The report attributes this decision to protests by tribal groups against mining in the state’s Khandadhar region.

The Bloomberg report says POSCO’s Odisha project had “failed to take off since 2005 because of opposition from local farmers and the failure to secure iron ore mining leases”. It says the company has been trying to get back the money it paid to government agencies for securing land and building railway connections.

POSCO spokesperson I G Lee confirmed to Bloomberg that six of 13 employees working on the project have “voluntarily resigned”.  However, both Lee and other company representatives told Bloomberg that the project was “on” and they were waiting for further progress.

Farmers were unwilling to hand over their fertile land to the project and tribal groups are concerned over the scope of their forest rights. There are also fears that the government is in the process of diluting the “consent clause” required for industrial projects.

POSCO had begun work on the boundary wall on the project site as of May last year. The proposed steel plant project got a boost when the district administration completed the land acquisition work by acquiring 1,093 hectares on July 4, 2013, in Dhinkia, Nuagaon and Gadakujang gram panchayats.

POSCO had earlier proposed a 12 million tonne per annum (mtpa) capacity steel plant. But later, the steel company had whittled down the project to eight mtpa and sought minimum 1,093 hectares of land to start construction.  The US $12 billion steel project is billed as the country's biggest FDI project.

Union steel minister Narendra Singh Tomar had announced recently that the steel giant would have to bid for the state’s iron reserves for their proposed steel plant in Jagatsinghpur district. Public auction is indispensable for allocation of minerals as per the recently passed Mines and Minerals (Development and Regulation) Amendment Ordinance, 2015. The Bill, which was supposed to replace the ordinance, has now been passed and is known as the Mines and Minerals (Development and Regulation) Amendment Act, 2015.