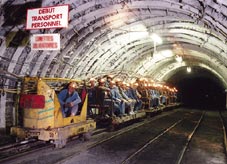 April 23 marked the end of the 300-year-old coal mining industry in France. On that day, the last symbolic block of coal was extracted from the La Houve mine near the town of Creutzwald, abutting the German border. The closure was not abrupt; over the years, several west European coalmines have stopped production. Yet the French miners gathered on the occasion were in a sombre mood. After all, this was the industry that had once employed more than 3,00,000 people in France and fuelled the industrial revolution.

"I understand the feeling of sadness that the workers have today," the French industry minister, Patrick Devedjian, reportedly commented. Devedjian, who attended the ceremony, was given a tour of the mine. Although the 400 miners of La Houve will lose their jobs, under a special deal the state will bear the cost of the salaries and housing of those who have served for more than 20 years in the mine till they reach retirement age.

The discovery of coal in France in the 1720s was perhaps the biggest driving force of the industrial revolution, transforming the economy and societies of western Europe and North America. Coal fuelled the industry and smokestacks became signs of progress. But by the 1960s and 1970s, coal-based energy systems began to be replaced by hydropower and nuclear power. Today, France sources 80 per cent of its power from nuclear plants.

For over a decade now, the trend of closing down coalmines has continued across Europe. During the past 20 years, more than 150 mines have shut up shop. Coal mining in Europe proves very expensive as compared to imports from South Africa or Australia. But the industry is heavily subsidised by many governments. France, for instance, had been spending us $3 to mine us $1 worth of coal. The French government spent more than us $41.8 billion in subsidies between 1971-2000. Germany doles out almost us $3.5 billion annually as subsidy to the hard coal mining sector. According to estimates, a tonne of French coal costs about us $180 to extract, compared to a paltry us $15-20 for a tonne of coal-strip mined in the us, South Africa or Australia. Coal currently accounts for about 26 per cent of the total global energy production. China is the world's biggest producer and consumer of coal.

However, the larger question that looms is: which energy source will replace coal? While France continues to rely heavily on nuclear energy, seven other eu members have made a commitment to phase out nuclear power. In Germany, 30 per cent of the electricity is derived from nuclear plants. But the country has decided to shut down all such units by 2020. Incidentally, that is also the target year by when Germany hopes to tap renewable sources for meeting 20 per cent of its energy needs. In fact, the phasing out of nuclear power plants and coal mining could provide an ideal launching pad to renewables.