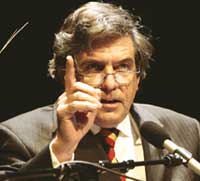 This is a glimpse of another ugly face of European farm subsidies. It was recently revealed that The Netherlands' agriculture minister Cees Veerman received nearly us $233,000 subsidies for his farms in France and The Netherlands in 2004. Veerman has now promised to furnish details of all public payments made to Dutch farmers by early September 2005.

The disclosure was made following requests by Evert Vermeer Foundation (evf), a pro-developing country research institute linked to the Dutch Labor Party, under the freedom of information legislation. "We want to reduce this absurd subsidy system...This is for the benefit of European taxpayers and to find a solution for developing countries. If they don't release the full figures, we will ask what else they are hiding," said Yannick du Pont of evf.

Earlier, the governments of Denmark and the uk have had to suffer severe embarrassment due to similar revelations about distribution of subsidies. In June 2005, disagreements on agricultural spending created a major crisis for the eu, leading to the breakdown of its summit.