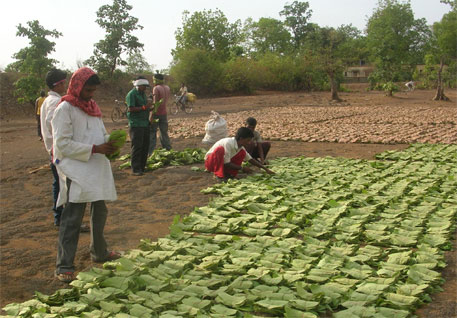 The Forest Rights Act (FRA), which protects the rights of tribal people and forest dwellers over their forests, is under fire like never before. Multiple ministries in the ruling National Democratic Alliance (NDA) government are putting pressure on the Union Ministry of Tribal Affairs (MoTA) to withdraw its stand upholding the landmark law enacted in 2006.

This is in contravention of the community forest rights provisions of FRA which gives absolute authority to the Gram Sabha (village council) over forests under the community's jurisdiction. In Maharashtra, several communities have claimed rights over community forests under FRA and have taken over the trade of minor forest produce such as bamboo and tendu leaves which was previously controlled by the forest department.

Researchers and activists working on forest rights say the Maharashtra government’s move is meant to impede further implementation of FRA in the state. The Village Forest Rules notification says that the village forests will be notified in the areas where FRA is not applicable or where communities have not claimed rights over forests. But, according to FRA, forest rights are supposed to be recognised in all the forests. It also says that the villages where community forest rights have been recognised can also voluntarily declare their forests as village forests.

The Village Forest Rules emerge from the Indian Forest Act (IFA), 1927, a colonial law which gave absolute power to the forest department to take control over forests. Millions of forest dwellers who lived in the forest and depended on forest resources for livelihood became unauthorised settlers as the government became the owner of most of the forests under the country using this law. It was precisely to undo this “historic injustice” that the FRA was enacted by Parliament. “The provision of the village forests was the only provision in IFA that to some extent talked about the participation of communities in forest management.

In the initial years, communities across the country fought with the forest departments demanding the declaration of village forests. However, for the past more than 80 years of existence of IFA, no state drafted rules to declare village forests. Now that there is FRA recognising absolute authority of communities over forests, the forest departments want to use the provision of village forests to counter FRA,” says Tushar Dash of non-profit Vasundhara that tracks implementation of FRA. He says if these rules were to come through, they will have a national implication as other states in the country would also start framing such rules under IFA.

When this came to the notice of tribal affairs ministry, it issued a letter to the Maharashtra government in August this year to keep the Village Forest Rules in abeyance saying that the rules were “prima facie” in violation of FRA. However, within six days of the MoTA raising its objection, Gadkari whose ministries have nothing to do with the forest management issues wrote to Oram. Gadkari said the Village Forest Rules were actually empowering the village panchayats in the state. He requested the minister to withdraw the objections against the rules and discuss the matter with Union ministry of environment and forests (MoEF) as the rules were issued under a law administered by MoEF. Ten days later, MoEF staff, on the instructions of environment and forests minister, Prakash Javadekar, also wrote to Oram, making the same request.

This is not the only instance when Gadkari or Javadekar have attempted to undermine the provisions of FRA. In July, the panchayati raj ministry under Gadkari issued letters to all the states with Fifth Schedule areas, instructing them to bring the management of minor forest produce (MFP) such as bamboo and tendu leaves under joint forest management (JFM) committees. This was again in contravention of FRA as the law gives absolute authority to the Gram Sabhas to manage MFPs through their own committees while JFM committees operate under the authority of forest departments. For long, the forest departments have been pushing for JFM, which is an executive policy of the MoEF for management of forests and against community forest management under FRA.

The attempts to undercut FRA are reportedly at the behest of people in the highest level in the government. Highly placed sources in the government say that the FRA is on the top of the list of the laws and scheme that are considered to be hindering the “development agenda” of the NDA government. “In a presentation given by Javadekar to the Prime Minister's Office (PMO) on the completion of 100 days of the government, he put the MoEF resolution of 2009, requiring consent of the Gram Sabha for diversion of forests, as the biggest hurdle in development,” said the source. FRA mandates that no forest dweller can be evicted from forestland unless the recognition of forest rights is complete in that region.

Relying on the fact that FRA gives absolute authority to the Gram Sabha to take decisions on the forests under their jurisdiction, the MoEF in 2009 made it mandatory for industrial projects to take consent from the Gram Sabhas before applying to MoEF for the permission. The UPA government then wanted to withdraw this order, but the job was made difficult by the Supreme Court which last year upheld the authority of Gram Sabhas in deciding fate of their forests, in the matter of Niyamgiri Hills in Odisha (see ‘Battle for Niyamgiri’).

The NDA government has been consulting legal experts to find ways to bypass the requirement of consent of communities before clearing the forests. Sources in the government say that the Centre is also considering an option to let the states decide whether the consent of the Gram Sabha is required for a project or not. “Since forests fall under the concurrent list of the Constitution, the Centre is considering putting the onus of deciding whether to seek consent of people for diversion of forest or not on the state. This will make their job easier in clearing the projects.”