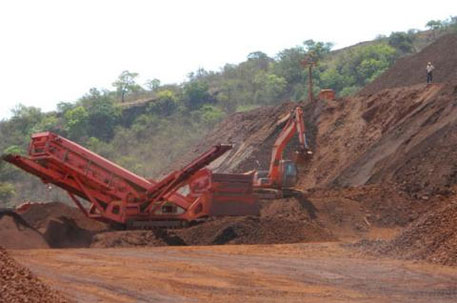 In a decision that could be a big boost for iron ore miners in the country, the Ministry of Mines has assured that the mining sector will become the most thriving sector for business in India.

But the tribal affairs minister, Jual Oram, has opposed iron mining in his own constituency in Odisha. Oram, who has been opposed to mining in that region for long, stated that mining activity will threaten the rights of tribal communities living in the area. The minister has also expressed the need for consulting the ministry before doling out clearances to various mining projects in tribal areas of the country.

According to Anup Pujari, the newly appointed secretary with ministry of mines, the new government would like the mining sector to increase its contribution to Gross Domestic Product (GDP) of the country. “It is our intention to not only restart the mining processes of iron ore but to make sure, what the Confederation of Indian Industries (CII) has said—the contribution of the mining industry to GDP should go up from 2.1 per cent to 5.5 to 6 per cent by 2020—is realised,” said Pujari, while addressing a large gathering of mine owners in a conference organised by CII. The conference was attended by top officials of Sesa Sterlite, Jindal Steel Works and Rio Tinto.

On Sunday, June 9, Jual Oram had said that the Odisha government should re-consider the decision of allowing mining in Khandadhar hills which has a reserve of nearly 200 million tonnes of iron ore. “Khandadhar should not be destroyed for sake of iron ore mining. I am against any sort of mining in Khandadhar and this is my party’s stand as well,” said Oram in Delhi. South Korean Steel manufacturer POSCO has been eyeing the Khandadhar deposit to meet the raw material requirement for the steel plant in Jagatsinghpur district of Odisha.

Pujari, however, indicated that the practice of granting deemed lease to the mine owners when mining companies are in the process of renewing their lease will be discontinued. He also hinted at strengthening of green clearance system. According to the Supreme Court-appointed Justice M B Shah Commission’s findings, illegalities and over-extraction of iron in three states—Karnataka, Goa and Odisha—happened as many of these leases were given deemed extension despite the mine owners filing for the renewal of the lease.

The industry body that organised the conference also presented a set of recommendations to the secretary calling for reforms in mining sector. It suggested that the government should declare mining as a strategic and infrastructure sector that is “critical for nation’s growth in manufacturing sector, creating employment, preventing drain of valuable forex and propelling growth in some of the most backward states”.

The industry body has also recommended that Geological Survey of India’s (GSI) role as an explorer should be limited. “Rather, GSI should focus on creating an environment which attracts exploration activity,” said an official. At present, GSI has been entrusted with exploring mineral wealth of the country.

Further, the industry body stated that the proposed mining sector reform should not include additional levies. It asked the government to delete stipulations like contribution to district mineral foundation, Central and state cess, as well as corporate social responsibility from the proposed mining sector reforms. CII officials stated that such stipulations have been already defined under land acquisition Act and Companies Act.

For Pujari and other officials in the mining ministry, it will be great challenge to increase mining sector’s share in GDP, with industries on one side and rights of locals on the other. During the conference, Pujari said discussions are being between Union Ministry of Tribal Affairs, Union Ministry of Environment and Forests and Climate Change, and Ministry of Power and Steel to maximise the output from the mining industry while keeping the concerns of the local communities in mind.

Report: Report of Justice M B Shah Commission of enquiry for illegal mining of iron ore and manganese in the state of Odisha

Report: Sustainable development framework for the mining sector in India: a draft report for discussion