Ministry refuses to learn from experience

The MNES has proposed the establishment of a solar thermal power plant near Jodhpur, even though such plants have proved commercially unviable in the past. 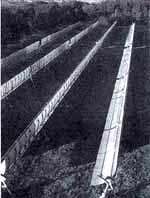 IN A CONTROVERSIAL move, the Union ministry of nonconventional energy sources (MNES), has decided to establish a Rs 382 crore, 35 MW solar thermal power plant near Jodhpur in Rajasthan, even though earlier solar thermal units in the country have been beset with problems and found to be prohibitively expensive.

The proposed plant, ironically, involves import of technology that was used for an unsuccessful 50 KW project established in 1989 by the MNES at Gwalpahari in Haryana. The technology and the equipment for this plant were supplied by Luz International Ltd of Israel, which had set up most of its plants in the Californian desert in USA. Bharat Heavy Electricals Ltd (BHEL), which is to execute the project for MNES, has already begun discussing the modalities of the transfer with Solel Solar Systems of Israel, which now holds the rights and patents for the Luz technology.


While MNES officials say one of the major reasons the project is being pushed through is the promise of easy money from the Global Environment Facility, they are themselves doubtful of the technological viability of the project. Admits MNES advisor J Gururaja, "There has been no technological breakthrough that can be said to have spurred the installation of a solar thermal plant." Nonetheless, he asserts the decision to explore the potential of the solar thermal sector is valid in the face of the ambitious target of 2,000 MW to be achieved from non-conventional sources during the current five-year plan.

Ministry officials are, however, unable to explain what lessons have been learnt from the aborted or malfunctioning solar thermal plants in the country. In the 1980s, two major solar thermal power plants were set up. The first was a 20 KW plant installed at Hyderabad as part of a project funded by the United States Agency for International Development, the technology for which was provided by the Jet Propulsion Laboratory of USA. However, this plant was abandoned because of managerial problems as well as the high operational and maintenance costs. Subsequently, leading energy research institutions in USA also branded this technology as "commercially unviable".

The second project, at Gwalpahari, was based on the distributed receiver technology that is more viable commercially. However, even this plant went into disuse because of a crippling dependence on imported machine parts, which were expensive and difficult to procure. Although the plant was meant for a peak generation of 50 MW, it could generate only 20.5 MW and that too, for only a short period.


Solar thermal technology has already drawn criticism in India. A K Ghosh of BHEL's advanced research projects group feels, "The operation of the plant in Indian conditions could pose unexpected problems as the Thar desert is more prone to dust storms than the Mojave desert in California where similar plants are functioning." Besides, the problem of imported components has not been resolved. The Israeli firm has refused to transfer the production technology for a crucial component -- the heat collector element (a metal conductor element surrounded by a glass tube and sealed in a vacuum) -- till the MNES agrees to establish solar thermal power capacity of the order of 200 MW.

Moreover, MNES officials have no answer to the charge that even large-scale capacity creation in other countries, particularly USA, has failed to make solar thermal technology commercially viable. Even pro-solar energy lobbies such as the Solar Energy Industries Association of USA have admitted that the solar thermal programme in that country was heavily dependent on huge subsidies from the federal government. In fact, it was the reduction of these subsidies that led to the bankruptcy of firms such as Luz and the subsequent change in their ownership.

Solar thermal capacity of 350 MW was created in the US at a cost of $3 billion, of which the subsidy component was one-third. The largest solar thermal plant in that country is located near California and has a 10 MW capacity. After 5 years of technically successful operation, it has now been declared commercially unviable. But, whether the MNES will keep these lessons in mind is another matter.