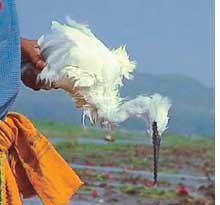 MIGRATORY birds that have flocked to their winter home in Lake Chilika in Orissa are under threat from poachers.

Three cases of poaching have been reported in the last two months from villages around the lake. "As many as 18 killed birds were seized in Sorana, Kalupadaghat and Mangaljodi villages. The poacher caught with the birds at Mangaljodi was a minor," said Bijay Mohapatra, the area assistant conservator of forests.

The wildlife department has a tough job on hand as the lake covers a vast area and poachers constantly devise new ways to kill the birds and smuggle them out. The latest trend is to use poisoned grains and food balls to kill the birds and have children smuggle them out to escape notice of forest guards. "Old time poachers are using boys as carriers to escape notice of forest guards. This is a very disturbing trend," said Biswajit Mohanty, secretary of the non-profit Wildlife Society of Orissa. About a dozen boys were caught last year for poaching. Wildlife officials however said that the boys are not habitual offenders.

Special arrangements have been made this time to check poaching. Eighteen anti-poaching squads including two mobile units have been formed to keep vigil over the lake, said Mohapatra. Fifteen habitual offenders have been identified and are being kept under special surveillance.

The problem of poaching is acute in 39 out of 132 villages that border Chilika. "Special bird protection groups have been formed in these villages and members of the groups have been included in the anti-poaching squads," Mohapatra said.

He said a better way to check poaching would be to promote eco-tourism. It is mostly the poor fishermen who take to poaching birds. If they are employed as guides who take tourists on joy rides, they can earn their livelihood in a better way, said Patra. The lake is spread over 1,100 sq km in three districts. The lake's islands host Siberian cranes, flamingoes, herons, ibises and numerous waterfowls.