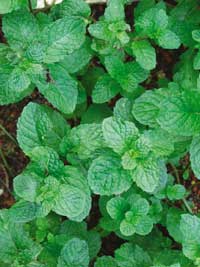 mint, a popular flavouring in Indian cuisine, can be used to preserve processed food, claims a study. It can replace synthetic preservatives like butylated hydroxy toluene (bht), claim scientists at the Food Technology Division of the Bhabha Atomic Research Institute in Mumbai.

Led by Ramesh Chander, the scientists tested the effectiveness of mint leaves on preserving processed lamb meat. They found that mint had strong antioxidant properties that make it a good preservative. "Mint is the only natural compound we have found so far with antioxidant properties comparable to bht. Now we are studying the economics of transferring mint to the food processing industry," says Chander. The study is scheduled to appear in the journal Food Chemistry in January 2007.

Synthetic preservatives lead to several side effects like hyperacidity, rashes and asthma.Tests on rats have shown that bht even causes cancer. But mint will be free from such side effects, the scientists say.

Mint has other properties too. Its abilities as a pain killer have long been known in traditional medicine. Now a study by a group of scientists from uk's Edinburgh University has revealed how mint oil relieves pain.

Led by Rory Mitchell, the group found mint oil activated a molecular receptor called trpm 8, which provides relief from chronic pain such as that induced by arthritis and nerve damage. The study was published in Current Biology (Vol 16, No 16, August 22).