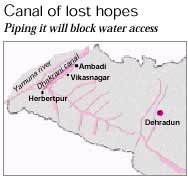 a project to turn a 145-year-old surface irrigation canal in Uttaranchal into an underground canal is threatening livelihoods in over nine villages of Dehradun district. The two-year-old proposal of the Irrigation Department (id) regarding the Dhakrani Canal, which supplies water from Ambadi to Herbertpur crossing, was accepted recently. The project involves piping the canal, which blocks the access of the villages to its waters. But while the original purpose of the move exists no more, villagers as well as experts claim that even the current stated purpose could be fulfilled without interfering with people's lives.

The 10 kilometre (km)-long canal was built in 1860 and has since been the lifeline of villages along its course, irrigating around 1,000 hectares of land, meeting domestic water needs and serving as the drainage channel for excess water. "We don't get even drinking water for months together. The canal is our only source of water then," says Surat Singh Tomar of Nawabgarh, one of the affected villages. With 1.5 km of the canal already piped, many villagers who own dairies have already started selling their livestock due to water scarcity. Waterlogging in the fields due to the accumulation of rainwater has also begun.

A K Dinkar, executive engineer, id, Kalsi, says the project's only purpose is to ensure that the canal's water reaches its tail end, Herbertpur. But P S Rajvanshi, retired chief engineer, id , points out that this can be easily ensured by lining the canal with concrete. Besides, D S Rao, assistant engineer, id informs:"When the project was first proposed, the main aim was to broaden the road running next to the canal, but we didn't get the required funding. So there is no road broadening on the agenda now." The question, then, is: why pipe the canal at all?

Although the government had originally announced that the project will comprise building an underground system, it now claims that was a technical error and the canal will only be piped, not made underground. Thus, work on the canal began with pipes being laid one-and-a-half metres above the ground level. "It was only after we protested that only 92 metres of laid pipes were removed and laid again. But even now, most of it is jutting out without any drainage gully next to it. All the rainwater is pushed back into the fields and storage barns," complains Kuldip Singh, a Dehradun zilla panchayat member.