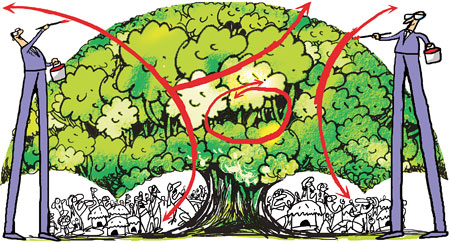 FRESH guidelines by the Ministry of Environment and Forests to identify inviolate areas for wildlife have bypassed the Forest Rights Act of 2006. They threaten the interests of forest dwellers.

Issued on February 7, they empower the Divisional Forest Officer and the Park Manager to arbitrarily identify areas in and around national parks and sanctuaries as Critical Wildlife Habitat (CWH) within 60 days. No involvement of local people is required in the identification process.

The Act promises to protect the traditional rights of forest dwellers over forest land and resources. While it has provisions to define areas of utmost wildlife importance in national parks and sanctuaries as CWH, it puts several stringent conditions to be fulfilled before forest-dwellers are moved out.

As per the Act, CWH must be determined on the basis of scientific data and after consultations with people in the region. A state-level panel must be formed for this with experts of the locality and representatives of the tribal affairs ministry. There is no mention of these provisions in the fresh rules.

Further, the Act states that the rights of people living in CWH can be taken away only if it is proved that their presence in the area is causing irreversible damage to wildlife and their coexistence is not possible. The fresh guidelines do not mention this. In violation of the Act, the guidelines extend inviolate areas to outside the existing protected areas.

While the Act defines CWH as part of national parks and wildlife sanctuaries, the forest department can now identify such areas “in and around” the parks and sanctuaries.

“This is a ploy of the bureaucracy to retain control over forests. They have disregarded the rights of people over forests,” said Shankar Gopalakrishnan of Campaign for Survival and Dignity, a Delhi-based non-profit fighting for tribal rights. “The Act ensured CWH is not identified arbitrarily as has been the case with most national parks and wildlife sanctuaries, demarcated without consulting people and scientists,” he added.

The environment ministry has been under fire for allowing illegal eviction of forest dwellers from tiger reserves. A joint panel of environment and tribal affairs ministries, headed by former bureaucrat N C Saxena to review implementation of the Act, found that several states had relocated people without recognising their forest rights. This was especially true in Chhattisgarh, Rajasthan, Odisha and Maharashtra.

New guidelines were introduced as a corrective step when the environment ministry’s previous guidelines, issued in October 2007, failed to help create CWHs (See ‘How new rules violate the law’). The ministry said the old guidelines were not “time-bound” and “simpler”.

But the 60-day deadline set now to identify CWH is not logical, said Tushar Dash of Odisha-based non-profit Vasundhara. “We have done a community-based exercise to identify CWHs in the parks of Odisha. It took us more than six months to identify such areas in one park,” he said. “Such a short deadline may help the department rush the relocation process even before settling people’s rights. How can the ministry expect the rights to be settled in a timebound manner? The deadline will increase the harassment and put pressure on forest dwellers,” Dash added.

The process of taking gram sabha’s consent on any relocation has also been diluted. In fact, the guidelines recommend that relocation can start even if a small number of families agree. “But this will open way for the forest department to pressure families individually and push relocation step by step,” said Gopalakrishnan.

To compound people’s problems, the compensation is not as per the Act, which mandates secure livelihood to villagers who are relocated. There are two options for compensation—villagers either get Rs 10 lakh or rehabilitation equivalent to the amount by the forest department. This can create disparity as forest dwellers possess different land areas. “These provisions are the root cause of failures of all the previous rehabilitation programmes. People lose their livelihood and access to forests and the cash does not provide them a secure livelihood,” said Madhu Sarin of the Campaign for Survival and Dignity.

Reacting to all-round criticism, environment minister Jairam Ramesh said that the Act had not been violated. However, his clarification only made people more angry. “The guidelines state that CWH will be identified after extensive consultations with sabhas,” Ramesh added emphasising that consultations meant consent.

It is easier said than done, said Ritwick Dutta, a Delhi-based environment lawyer. “Consultation does not mean consent in legal terms. Unless the conditions and criteria mentioned in the Act are incorporated in the guidelines, it is unlikely that the state governments will abide by them,” he added.

Activists working for tribal rights have written to Ramesh demanding revision of the guidelines. The minister has now called a meeting of ministry officials, civil society groups working on forest rights, and groups working for wildlife conservation. The meeting may take place on March 4.

The guidelines proposed in October 2007 were revised because state governments found them difficult to implement, said environment ministry officials. But they covered most of the conditions mentioned in the Act. They stated that identification of the CWH should be done on the basis of the species-specific areas classified by the Wildlife Institute of India.

Instead of declaring all CWHs as inviolate, they said the size of the inviolate area within each CWH zone will be based on its potential to harbour viable population of the umbrella species.

For this identification, an expert committee comprising the state’s chief wildlife warden, representatives of the environment and tribal affairs ministries, wildlife experts, a social representative from the area or a member of the gram sabha was required. This committee had to hold public hearings with the gram sabha with at least one-third of its members. The affected gram sabha could object or give its comments. The panel had to assess the impact of human presence on animals and submit it to the government along with a written consent of the gram sabha.

Despite presence of these guidelines, the environment ministry framed fresh ones, knotting itself in controversies. No consensus on FRA review
Forest rights act under scrutiny
Grassroots victory
How government is subverting forest right act