The next time you see a spoilt brat, do not blame his parents. It could be just because of some extra lead in his bones 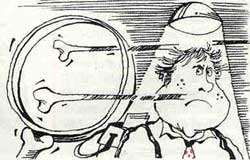 AGGRESSIVE behaviour and delinquency in boys may not be inherent, as is generally thought. It might also not be related to the social environment around the child- rather it could be caused due to the physical environment, A new study finds that high levels of lead in the bone might be responsible for this abnormality.

The study carried out under the leadership of Herbert L Needleman, a psy- chiatrist at the University of Pittsburgh Medical Center, us, analysed bone lead levels in more than 800 male students attending public schools in the city. Then they compared the same with the child's behaviour as assessed by his par- ents and teachers. They found a direct relationship between the amount of lead in the shin bone and aggressive behav- iour. None of the children were suffer- ing from lead poisoning.

Researchers took into account vari- ous social and family factors which have been linked to delinquency in children. Totalling nine in number these factors included maternal intelligence, socioe- conomic status and factors like number of siblings and two parents in the home. Theyalso accounted for the child's race and history of medical problems. After all this the lead delinquenCy relationship held strong.

Earlier studies on the effect of lead on child development were focussed on intelligence scOres and growth, and these have relied on lead exposure as indicated from its level in the blood. "Bone lead level may be more signifi- cant than blood lead because they are a measure of lead accumulation over a long period of time," explains David Bellinger, a lead expert at the Boston Children's Hospital in us, who goes on to say, " A child could have high bone lead while his blood levels are not high at the time they are measured."

Randy K Byers, who was a child neurobiologist at the Boston Children's HospiJ;al, more than 50 years ago, had linked acute lead poisoning in chil- dren to later 'violent, aggressive beha- vioral difficulties, such as attacking teachers with knives or scissors'. Another study by Deborah Denno, then sociologist at the University of Pennsylvania, i!1 us, where almost a thousand African-American boys and girls were studied from birth to the age of 22, reported that lead poisoning was 'the strongest predictor of disciplinary problems in junior high school boys and the third strongest predictor of b.oth juvenile and adult offences'. She opines that delinquency related to lead has nothing to do with Intelligence Quotient.

Such studies inspired N eedleman to test the effect of 'normal' lead exposures on the urban child and to see how it affected the child's anti-social beha- viour. The peak age for lead accumula- tion in the bones is 13-30 months when the child tends to put dirty fists and anything else into its mouth and thus takes in small quantities of lead. The Pittsburgh study found the blood lead levels in the children to be averaging about 12 micrograms per decilitre of blood. Now with the ban in America on leaded gasoline, the average blood lead level has gone down to 3.2 micrograms, indicating that today's child is less likely to develop into a delinquent due to lead accumulation in the bone.