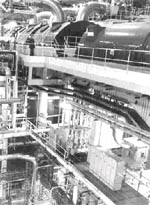 there is increasing international pressure to shut down a controversial nuclear-reprocessing plant in London. According to reports in the Guardian , Denmark, Iceland and Ireland areplanning to invoke environmental treaties relating to radiation-emissions to compel suspension of all reprocessing activities at the Sellafield plant. The governments are reportedly worried about Sellafield's emissions into the North Sea. British Nuclear Fuels ( bnf ), which owns the plant, said there is no question of abandoning reprocessing work.

Meanwhile, bnf was dealt a blow when Germany's environment minister Jrgen Tritin warned of an end to its nuclear waste reprocessing business with German atomic power stations. Besides Germany, Switzerland, Japan and Sweden have also suspended shipments of spent fuel to Britain. They have all been angered by a report in February which stated "systematic management failure" at Sellafield.