An interim report on project implementation by the GEF highlighted the mismanagement, wasteful expenditure and squabbling that plagues it. 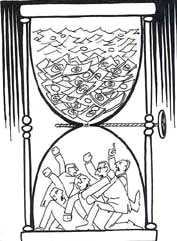 EVEN AS the threat to global biodiversity and the atmosphere increases, the Global Environment Facility (GEF) has frozen all on-going projects and postponed decisions pertaining to others till early November, when the Independent Evaluation Committee will submit its final report.

The freeze was prompted by an interim report, which suggests that mismanagement, wasteful expenditure, bad decisions and the use of unqualified people as consultants has marked the implementation of GEF's programmes.


The report also highlights the squabbling between the World Bank, the UN Development Programme and the UN Environment Programme -- the three constituents of GEF's implementing committee.

According to the report, though many Northern countries are vocal about environmental degradation and the need for corrective action, they do not fulfil their promises about funding. For the first phase, the GEF was expected to mobilise 1 billion SDR (special drawing rights), but was able to come up with only 600-700 million.

The bigger problem, however, is that most of the projects are schemes of the World Bank, which considers GEF merely an additional source of funding and thus ignores its objectives.

The report says, "The absence of a national environment framework in many of the countries where GEF projects are situated, underlines the insufficient attention paid to the capabilities of the developing countries." The report also underlines the "shortage of experts with region- and country-specific knowledge".

It notes that the implementing committee has been the least satisfactory of the GEF organisational arrangements. "Although the decisions of the implementing committee on the inclusion of a particular project into the work programme, were supposed to be taken by consensus by the three agencies, strong objections from one or even two of them were overruled and ignored by the partners".