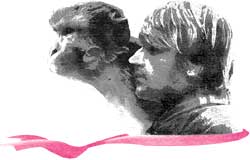 the human-monkey linkage certainly seems to be a strong one. Along with leaving their mark on the humans, the primates also seem to be responsible for transmitting fatal diseases like aids to their so-called descendents. This was recently revealed during a study conducted by researchers from France who identified a virus similar to hiv in 19 greater spot-nose monkeys of Cameroon.

According to him, Vpu's discovery gives new insight about how the virus enters the human body -- either by creating new strains of the divergent hiv viruses or by combining with the existing ones.

The ird researchers speculate that the virus must have been initially transferred to humans through infected meat of the spot-nose monkey. "Though the risk of transmission is very slight, it is possible that humans might have been exposed to siv gsn by cuttingthemselves while preparing infected meat. We had known that hiv jumped the species barrier between monkeys and humans some time in the last century. But how the transmission took place was always a big mystery for the entire scientific community that has now been solved to a great extent," said Delaporte.

"The discovery would help in evolving ways about how to prevent the further spread of hiv in humans, and how to develop better treatments and eventually more effective cures and vaccines," said John Godwin, head of policy and advocacy, National aids Trust of the uk . Delaporte opines that the next step should be to develop tests to screen all simian viruses to evaluate the risk to people.

Though refuelling the debate about the origin of the aids causing virus, the discovery has cleared a misconception: it is the monkeys and not the chimpanzees who are directly responsible for transmitting aids to humans. This conclusion was derived in wake of the fact that like humans chimpanzees too love eating the spot-nose monkeys.