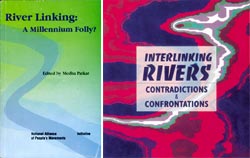 To those who prefer the uncomplicated, the idea of interlinking India's rivers is seductively simple in its appeal. It can be summed up thus: transfer the "surplus" floodwaters of the Ganges-Brahmaputra basin to the Central Indian and Peninsula rivers. In the course of this manual replumbing of the Indian sub-continent's hydrology, the project, it is claimed, could eternally banish drought, cure floods, irrigate about 150 million hectares and also generate about 30,000 mega watts of hydel power. The interlinking rivers project (ilp) attempts to revive the long discarded notion that wherever Nature is "incompetent" in its distribution of resources, engineering ingenuity and political will can recreate more efficient outcomes. The simple can be elegant, but at times it can also be banal and downright absurd.

The two books under review are collections that challenge the claims the ilp. In the introduction to River Linking: A Millennium Folly, Medha Patkar sets the tone for the subsequent essays. She points out how much of the ilp is, in reality, being planned, executed and assembled in complete disregard to any democratic dialogue with citizen groups or people's organisations. On the one hand, Suresh Prabhu (erstwhile Chairman of the Task Force) declared in a public meeting in November 2003 that the ilp was merely a concept and not a project. On the other, his agency has been boasting the completion of studies on six links and plans to carry out two of them.

The essays in the volume explain why duplicity and non-transparency will become the chief modus operandi if the ilp is implemented. Ramaswamy Iyer observes that large inter-basin transfers in India will be politically difficult and explosive. He observes that, when intra-basin water transfers within state boundaries are themselves so mired in conflict, any consensus that the ilp could manufacture between different states would inevitably be short-lived. The other essays point out how the ilp is economically unfeasible. The estimated cost, for example, is us $112 billion, twice the revenue that the government of India earns in a year. Even if we accept this, the fact remains, as Prabhu has also clarified, project costs could perhaps go up to us $200 billion.

Shockingly, the ecological consequences are yet to be assessed properly, as also the large-scale displacements that will follow. At the technical level, it is doubtful if the massive water transfers can be carried out cheaply by gravity flows. If huge amounts of energy are required to propel or pipe water across the basins then the whole idea of generating hydro electricity might be defeated. The Task Force is also yet to explain how India will go about assuaging the anxieties of neighbouring countries.

The booklet, Interlinking Rivers: Contradictions and Confrontations compiled by Uma Shankari is an impressive report based on the electronic discussion on the ilp. The booklet is full of insights and I would particularly urge the readers to look at the section on the responses of the various state governments to the ilp. Karnataka was doubtful; Andra Pradesh was prepared to offer only conditional support; Bengal, Kerala, Bihar and Assam were either against the project or filled with suspicion. The upshot of all these differing positions has much to do with the fact that no state wants to be declared as possessing surplus waters as this could jeopardise their power over their own waters in future. Even the case of Tamil Nadu which supports the project is made in the light of the fact that the state government is convinced that the state is a water deficit one and, therefore, won't have to part with any of its rivers.

The hard politics of the ilp are brilliantly brought out in this compilation. Fittingly enough, the gargantuan nature of the ilp has caused an equal and opposite reaction amongst the country's citizenry. We can expect this to become one of the most decisive battles on the future of India's hydrology and the direction of her democratic possibilities.