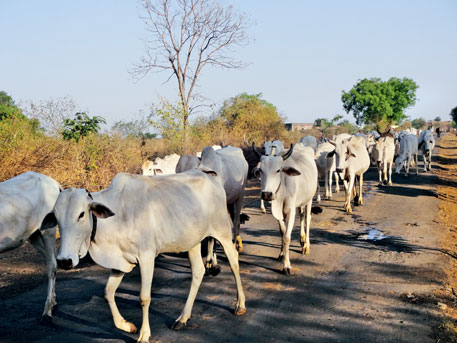 The NDA government has initiated a programme to conserve and enhance productivity of India's indigenous cattle breed in mission mode. The Rashtriya Gokul Mission, Rs 500-crore project, will be kicked off this year with initial sum of Rs 150 crore. Agriculture minister Radha Mohan Singh called a press conference to announce theis. “The project aims to conserve and develop indigenous cattle breed in a focused and scientific manner where they would be managed by using new farm management practices and superior nutrition,” he said. RGM is a focused project under the National Programme for Bovine Breeding and Dairy Development during the 12th Five Year Plan.

The project would be implemented through state implementing agencies—livestock development boards. State “Gauseva Ayogs” would be created and they would have the mandate to sponsor and monitor implementation of proposals undertaken by livestock development boards. All agencies like Central Frozen Semen Production and Training Institute (CFSPTI), Indian Council for Agricultural Research (ICAR), agricultural universities, non-profits, cooperative societies and gaushalas (cow shelters) will be the participating agencies for the programme to ensure availability of best livestock germplasm.

Gopal Ratna and other incentives

The minister said funds would be allocated for establishment of integrated indigenous cattle centres called Gokul Grams, strengthening of bull mother farms to conserve high genetic merit of indigenous breeds, establishment of field performance records of a breed, and assistance to institutions which are repository to best cattle germplasm. Apart from this, Gopalan Sanghs, which would be breeder societies, would be also established and farmers who maintain high value animals of indigenous breeds would be awarded with “Gopal Ratna” and breeders socities will get “Kamadhenu” awards. The government will also organise milk yield competition for indigenous breeds and training programmes for technical and non-technical personnel working in institutions engaged in indigenous cattle development.

Cattle’s rearing has been a traditional livelihood in India and is closely linked to agricultural economy. India, with its 199 million cattle heads, has 14.5 per cent of the world cattle population. Of this, 83 per cent (166 million) are indigenous. Most of the indigenous cattle (about 80 per cent) are non-descript and only 20 per cent belong to breeds recognised by National Bureau of Genetic Resources. The cattle genetic resource of India is represented by 37 well recognised indigenous breeds and there are 13 recognised buffalo breeds. Indigenous cattle, in India, are robust and resilient and are particularly suited to the climate and environment of their respective breeding tracts. They are endowed with qualities of heat tolerance, resistance to diseases and the ability to thrive under extreme climatic stress and less than optimal nutrition.

Under the Gokul Gram component, integrated indigenous cattle centres would be created in the native breeding tracts and near metropolitan cities for housing the urban cattle. These will act as centres for development of indigenous breeds and a dependable source for supply of high genetic breeding stock to the farmers in the breeding tract. The Gokul Gram will be self sustaining and will generate economic resources from sale of milk, organic manure, vermi-composting, urine distillates, and production of electricity from biogas for in-house consumption and sale of animal products. The Gokul Gram will also function as state of the art in situ training centre for farmers, breeders and MAITRIs (extension workers).

The Gokul Gram can be set up independently or through public private partnership mode and will maintain milch and unproductive animals in the ratio of 60:40. It will have capacity to hold 1,000 animals and would maintain disease-free environment through regular screening of animals for important diseases like brucellosis and tuberculosis. An inbuilt dispensary and artificial insemination centre will be an integral part of the Gokul Gram.