A newly developed electric scooter happens to be the product of ..an accident? Well, a Japanese scientist unexpectedly discovered what he claims is the world's most magnetic material. This magnet which made this scooter a possibility, may setoff many more wonders 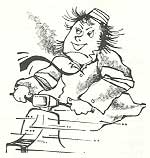 TO DATE, most of the research on electric vehicles has concentrated on developing super-efficient batteries in an attempt to maximise their range and power-to- weight ratio. However, until now, even the most advanced vehicles have required a mini battalion of such batteries to achieve a modest performance. The new scooter developed by Sciex Corporation of Japan runs on just four 12-volt car batteries.

The scooter's inventor, Yasunori Takahashi's breakthrough in electromagnetic technology came a few years ago while he was experimenting with new magnetic alloys. One of his laboratory staff misread his instructions and added the wrong element to the mix. "We Japanese often confuse the Roman letters b and d," says Takahashi. "My technician added neodymium (Nd) instead of niobium (Nb). The result was extraordinary because I suddenly found myself in the presence of the most powerful magnetic material I had ever seen."

Takahashi subsequently developed a manufacturing system to produce a magnetic powder that could be formed into anything from ultra-thin coatings to large permanent magnets. He now claims to have produced a magnet with the world's highest Megagauss Oersted rating - or MgOe (the unit measuring magnetism) - of 120 MgOe. This super-magnetic force is the secret behind the new Sciex scooter's performance.

Takahashi has redesigned a conventional electric motor fitted with his super-powerful magnets, thereby producing a highly efficient engine that will produce 15 horse power from just a few amperes of electricity. In fact, his motor is so efficient that when the scooter is throttled back and free-wheeling, the engine becomes a generator and partly recharges the batteries while on the move, giving the scooter an enormous range.

"The magnet can serve various purposes replacing the conventional ones in applications like producing credit cards and loudspeakers. It can bring about huge increases in information - storage capacity and quality," says Takahashi. One of the many novel uses for the magnet foreseen by Takahashi is extending the life of rechargeable batteries. This 'battery doubler' is already on the market in Japan. Takahashi now has bigger plans for commercial exploitation of his new magnetic discovery.