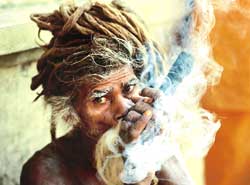 cannabis (Cannabis sativa) is close to shedding its tainted image. An international team of scientists has discovered that certain chemicals found in the banished plant could increase the growth of new brain cells, just the opposite of what's believed.

Scientists led by Xia Zhang, a neuropsychologist at University of Saskatchewan, Canada, injected a synthetically produced cannabinoid -- the active ingredient of cannabis -- into rats. The drug used -- hu 210 -- is about hundred times as powerful as tetrahydrocannabinol, the active ingredient in cannabis. They then used a chemical tracer to watch new cells growing in the hippocampus region of the rodent brain. They found hu 210 seemed to induce new brain cell growth, just as some antidepressant drugs do. Zhang says this suggests cannabinoids could potentially be used to reduce anxiety and depression. The findings by Zhang and his co-researchers from Canada, China and the us, appeared in the online version of the Journal of Clinical Investigation on October 13, 2005.

If borne out by further studies, the findings can have far-reaching implications for addiction research and the application of cannabis in medicine.

This is the second instance this year when cannabis' medical properties have been highlighted. Earlier, a British company, gw Pharmaceuticals, received permission from the Canadian drug regulator, Health Canada, to test the efficacy of an oral spray called Sativex. The under-the-tongue spray is said to help multiple sclerosis patients fight muscle spasms and relieve pain.