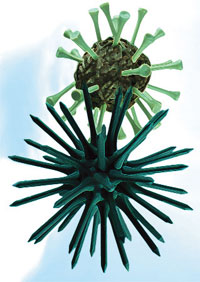 HOW viruses evolved has always been a puzzle for scientists. It is difficult to chart out a clear history of their evolution because they mutate rapidly and have high rates of mosaicism, wherein cells in a single organism display different genetic composition.

Scientists at Portland State University in the US have found a unique DNA-RNA hybrid virus. It is essentially a circular DNA virus which has inherited a protein observed in RNA viruses. The finding can help shed new light on virus evolution.

For the study, the team collected microbial samples from Boiling Springs Lake in the US—an acidic, high temperature lake—and sequenced they using metagenomics. Metagenomics requires extracting collective DNA of an environmental sample obtained from the soil or water and sequencing it without isolating and culturing individual species of the microbes. They identified the microbes as viruses.

Further during their analysis, they stumbled upon a unique fragment of a sequence wherein a DNA was coding for a protein found generally in RNA viruses. They then compared this viral genome with global database of virus sequences called Global Ocean Survey, using computer algorithms. They found resemblance between certain sequences of genome of previously studied virus and Boiling Springs Lake DNA-RNA Hybrid Virus. This shows that such viruses are not rare and commonly occur in marine environment, the team notes.

“The emerging story of viral evolution is that in the beginning, all viruses were RNA-based and that DNA viruses gradually evolved from RNA-virus predecessors,” says Geoffrey Diemer, co-author of the study published in Biology Direct on April 19. The discovery of this hybrid virus will help explain how this RNA-to-DNA transition might have occurred, he adds.

On why this virus is unique, he says, “It’s actually quite common for DNA or RNA viruses of the same type to exchange genes, but direct genetic transfer from an RNA virus to a DNA virus is unusual.” It is also unclear how this virus came into existence, but the authors speculate linear exchange of genetic material might have played a role. “It’s a complete mystery how this simple DNA virus actually acquired the RNA-virus gene. We don’t actually know the type of organism it infects, but we suspect that the host may have played a role in the formation of the hybrid virus,” says Diemer.

Rup Lal, professor of zoology at Delhi University and editor-in-chief of Indian Journal of Microbiology, says this study provides a missing link in the evolutionary timeline of viruses. He adds that metagenomics has the potential to study microbes, because it is not always possible to isolate and culture them. “However, for the researchers to really prove this is a hybrid virus, a culture-dependant study is required,” he says.

Will the discovery have any implications for pathology? No, says Diemer. “It is highly unlikely that the virus relates to the formation of new pathogens. A lot is known about viruses that infect people, and to my knowledge no hybrids of such different virus types have ever been found. Viruses that infect people target specific tissues. For example, disparate viruses like HIV and the common cold attack different tissue types and would not have the chance to intermix.”