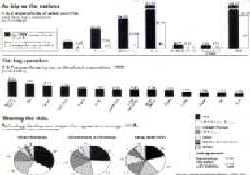 The UN's World Investment Report 1992 indicates the data available on the geographical distribution of R&D efforts of MNCs shows a growing trend towards internationalisation. A survey of 33 major firms shows 18 per cent of all their R&D employees in 1989 were employed in affiliates abroad. Some leading European MNCs such as Ciba Geigy, Royal Dutch Shell, Philips, Olivetti, Asea Brown Boveri and Norsk Hydro, spend more than one-third of their total R&D expenditure in foreign locations.

Typically, R&D activities of MNCs in developing countries are confined to adopting the technology of the parent company to local conditions. A strong presence of MNCs, in fact, can inhibit the development of an indigenous technological base beyond adaptive research. The UN report, however, says foreign affiliates appear to have contributed to the technological growth of developing countries by increasing over the past decade the share of R&D-intensive products in their total sales and their manufactured exports. Domestic enterprises in Asia, however, outperformed the MNCs in respect of R&D-intensive manufactured exports.

Another recent trend among MNCs, because of high risk, rising R&D costs (especially in new technologies) and rapid obsolescence of new products, is to form technology-related strategic alliances to share development costs. One example of this trend is the alliance that IBM has made with other corporations to develop its personal computer: the Lotus Corp is providing application software; Microsoft, the operating system; and, Intel, the microprocessor. Once very reluctant to conclude such alliances, IBM has now made agreements with more than 40 partners around the world. As a response to IBM, the Japanese computer firm Fujitasu has formed alliances with Texas Instruments, Siemens and Hitachi. MNCs from the US and Europe are the most active in forging strategic alliances, the bulk of which is in the area of information technology.

This trend will make more difficult the acquisition of technology by developing countries through traditional non-equity arrangements -- technology licensing, instead of joint ventures. Some newly industrialised countries have the potential and capability to become partners in these technology alliances. For example, Taiwan has provided good quality engineers at relatively low cost,while IBM provides experience in software R&D. Several firms in the South Korean automobile industry have entered into alliances with MNCs from the Triad (the US, the European and Japan).

Says the UN report, "These examples, however, represent only a small number of alliances that include developing countries. For most developing countries, the acquisition of new technologies is likely to rely -- at least for the present -- on intra-firm transfers by MNCs, rather than on inter-firm alliances between independent firms." The report continues, "The upsurge (of technological alliances) raises the concern that reduced competition in the international technology market and restrained access for developing countries could limit the contribution that the dissemination of new technologies can make to their growth."