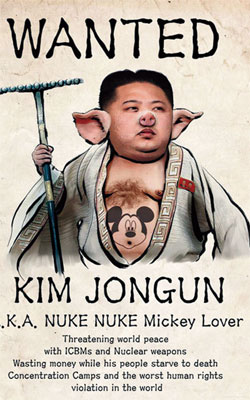 They blocked access to the site and its companion feeds were attacked and defaced. On Twitter, the Uriminzokkiri account’s profile photo was changed to one of a couple dancing the Tango, and a series of tweets read “Hacked” and “Tango Down”. The male dancer was wearing a Guy Fawkes mask, a trademark of the Anonymous hacktivist group.

The website’s Flickr page showed a number of images, including a mock-up “Wanted” poster featuring Kim with a pig’s nose and ears and a Mickey Mouse tattoo on his chest.

Uriminzokkiri is best known for posting propaganda videos excoriating the US and including images like the White House framed in the crosshairs of a sniper’s rifle sight.