Breakthrough deal made within framework of India’s liability law; US waives off condition to track nuclear material provided by it to India 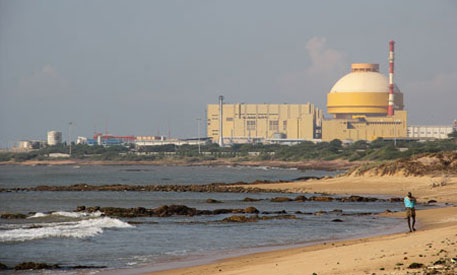 The United States and India sealed the deal on civilian nuclear energy cooperation agreement on Sunday after talks between visiting US president, Barack Obama, and Prime Minister Narendra Modi. The confirmation came when Obama and Modi issued a joint statement towards evening after a working lunch meeting between representatives from both countries and one to one “walk and talk” between the two heads of state at the Hyderabad House lawns in New Delhi.

The deal, also called the 123 Agreement, was held up because of differences between the two countries on India’s nuclear liability law for compensation in case of a mishap and US’ demand to track nuclear fuel and other materials supplied by it to India. India had termed this demand for access to India’s nuclear set up as intrusive.
The differences were resolved within the Indian liability law and after the US president used his executive powers to remove the “tracking” condition, suggest reports.

During the joint statement, Modi said that the civil nuclear deal was the centre-piece of Indo-US understanding.  He said in the past four months, the two nations have found a sense of purpose to move forward with the civil nuclear deal. “I am pleased that six years after we signed our bilateral agreement, we are moving towards commercial cooperation,” Modi said after discussions with Obama.

During the briefing, Obama said that important steps were taken during the meeting to support clean energy and climate change. He said he supports India’s ambition on solar energy as well.

On compensation under nuclear liability Act, sources confirmed that though India rejected proposal to change the law, it suggested a way out by offering to set up an insurance pool to protect companies constructing reactors in the country.  By doing this, India would provide relief to investors from the clause of paying huge compensation in case of an accident.

It is known that the US has cutting-edge nuclear technology and is desperately looking for new markets. India, on the other hand, is an emerging economic power, which is starved for power. India and the US had initiated the civil nuclear agreement in 2005, under which India agreed to separate its military and civil nuclear programmes. However, the energy growth graph became almost stagnant when the Indian Parliament passed the nuclear liability Act in 2010. The law makes the suppliers liable for compensation in case of any accident caused by faulty or defective equipment and also gives the government right to sue the suppliers. Suppliers of nuclear fuel, especially from the US and France, have been opposing this.

India and the US signed the landmark civilian nuclear deal in 2008, but differences remained over an Indian nuclear liability law that makes equipment suppliers ultimately responsible for any accident.