There is enough evidence that the project would be an environmental blunder, say activists 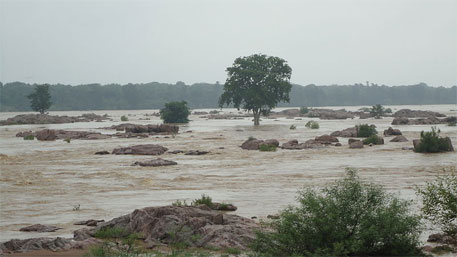 Madhya Pradesh chief minister Shivraj Singh Chauhan’s statement to the effect that the Ken-Betwa river link project will be brought into the priority list now that Narendra Modi has ascended to power at the Centre, has thrown up many questions about the newly formed NDA government’s professed commitment to environmental laws. In January this year, the UPA water resources minister Harish Rawat, too, had made an announcement to the effect that the project which has been in-limbo for many years would be revived. The question now troubling environmentalists is whether the new government will overlook the long list of serious environmental costs that the project entails.

India’s ambitious river linking project, involving around 30 links around the country, at an estimated cost of Rs 560,000 crore was put on the back-burner around a decade ago by vociferous environmental protests and political opposition. However, the Supreme Court of India granted government permission to go ahead with the project in February 2012.

See what SC said about river-linking

The Ken-Betwa project, which aims to transfer 591 million cubic metre of surplus water in the Ken basin through a 231.45 km canal to the Betwa river, claims to provide assured irrigation to 127,000 ha of agricultural land in the Raisen and Vidisha district of Madhya Pradesh, along with added benefit to some 47,000 ha area in the drought-prone districts of Hamirpur and Jhansi in Uttar Pradesh and Chhattarpur and Tikamgarh in Madhya Pradesh. The cost of the project is an estimated 1,988.74 crore at 1994-95 cost levels. 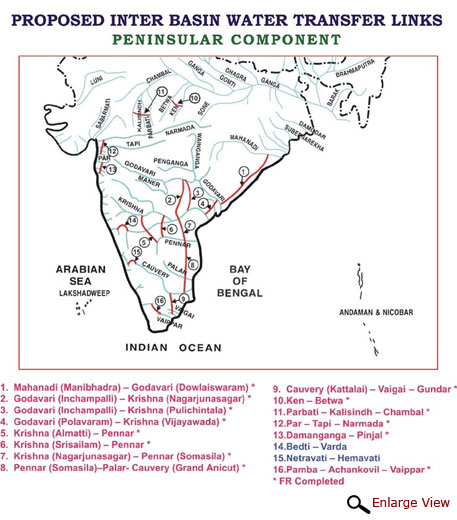 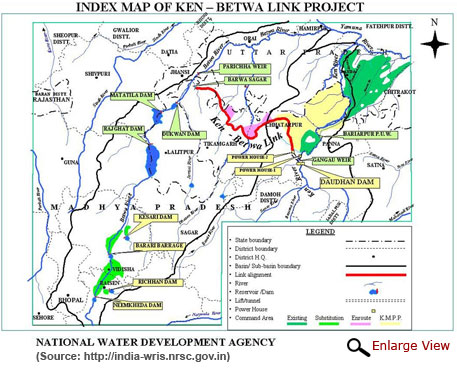 Environmentalists complain that the new enthusiasm around the project blatantly overlooks the huge amount of evidence generated earlier regarding the colossal environmental cost of the project.

“The recent activity around the Ken-Betwa river link project,” says Parineeta Dandekar of the non-profit South Asia Network of Dams Rivers and People (SANDRP), “is based on the premise that the project had merely gone into cold storage. Chauhan’s statement too is to the effect that the project had fallen off the radar during the UPA regime. However, the truth is that the project was a priority with the UPA government. It is the only river-linking project in the country for which the mandatory detailed project report (DPR) had been prepared, indicating that UPA had every intention of carrying it through.”

What actually stalled the project was the then environment minister Jairam Ramesh’s opposition to it in view of the fact that it would have required immersion of around 4,700 ha of land in the Panna Tiger Reserve, points out Dandekar. “This proves that the project is being revived for political reasons, no matter whether it is the UPA or the NDA that does it.”

Any effort to revive the project will require government to answer a plethora of uncomfortable questions. The proposed dam at Dudhan near Panna on the river Ken, from which water is proposed to be diverted to the Betwa basin, will require submergence of a total of 8,100 ha of forest land, of which 4,700 ha is part of the Panna Tiger Reserve. Diverting protected area land for development projects is a thorny process, and even surveys cannot be carried out without the permission of Supreme Court, which is going to be difficult to come by, say experts.

Where is the surplus water?

Another question is that of excess water in the Ken basin, which is actually wrong perception. “A letter to the United Nations Development Programme (UNDP) written by the commissioner of Panna says that if the so called excess water from the Ken river is diverted, the tribal belt of Panna and Damoh will remain undeveloped forever – it is only because this area has not been developed that the 'excess' water exists in the first place,” says Dandekar.

The Madhya Pradesh chief minister has justified the project in the name of providing assured irrigation to districts like Raisen and Vidisha, but the canal work of dams like Rajgadh and Matatila on the Betwa river, constructed to meet the requirements of these regions, has not been completed. “Why is fresh water being diverted into the river when there are no means to carry the water to the fields in the first place?” asks Dandekar.

Another thorny question that the Madhya Pradesh government is likely to face with respect to this project is that its own member of Parliament, Maneka Gandhi, from Pilibhit is opposed to the project. Gandhi has been known to have declared earlier that she had stopped the A B Vajpayee government from going ahead with river interlinking. Also, one of the reasons why the project could not progress is that the required agreement between the Madhya Pradesh and Uttar Pradesh governments could not be reached. How are these hurdles to be overcome? There are no answers.

According to Narmada Bachao Andolan leader Medha Patkar, who was a member of the now defunct interlinking of rivers (ILR) committee, it is impossible to implement the river linking project within the legal and constitutional framework. “It is not just a line between two rivers on a map,” she told Down To Earth. “The amount of data required to make the project justifiable is colossal and a plethora of planning and sanctioning processes are required before it can be implemented within the framework of law.”

Patkar said that as an ILR member she had studied the Ken-Betwa project. “It was being seen as a project ready for implementation,” says she. “But we found that the data was questionable and only three feasibility studies had been done. This is not at all sufficient as under law each sub-project involved is required to go through a detailed planning and sanctioning process. Also, each such project will involve direct and indirect displacement, and under the new Land Acquisition Act, consent and participation of the populace involved is necessary. None of these processes have been carried out as of date,” she says.

Patkar says that river linking model is based on analyses of “surplus” and “deficit” water in river basins, which, in order to be feasible, has to be based on correct and up-to-date hydrological data. “Internationally, the standard is 90 per cent probability, which implies that out of 100 years, the specified amount of water has to be available for 90 years at the least. Such colossal and environmentally invasive projects can be justifiable only when at least 75 per cent probability is there.” However, the data provided for the Ken-Betwa project is highly questionable,” she says. Another problem with the probability factor is that it is impossible to have authentic data because in modern times a lot of rivers are drying up and dying, so prediction is more or less impossible, she adds.

It remains to be seen how much importance the Modi government will give to environmental laws. Is the hype about cleaning up the Ganga limited to just one sacred river? Or will government bear in mind that all rivers and riverine ecologies are sacred to the people living near them?