Supreme Court rebuffs ministry for opposing relocation of the temple at a higher level, something its own committee had approved 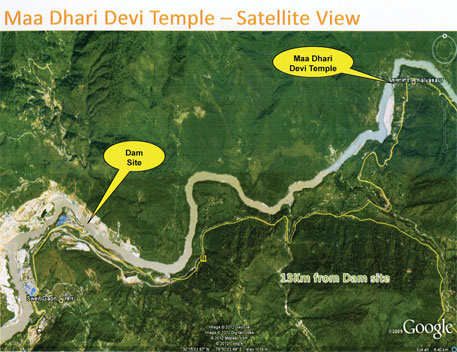 The Union Ministry of Environment and Forests (MoEF) has opposed the relocation of the Dhari devi temple in Uttarakhand that would be submerged by the Shrinagar Hydro-Electric Project being constructed along the Alaknanda river, a tributary of the Ganga. In an affidavit submitted to the Supreme Court, the ministry defended the right of people to worship at the temple, drawing a parallel with the Vedanta case in which the apex court had upheld the right of the Dongria Kondh tribal people to worship the Niyamgiri hill, earmarked for blasting for bauxite mining.

“The right to worship at Dhari Devi temple is identical to the case argued at Niyamgiri and it is submitted that the present position and location and the consequent right to worship at the Dhari devi temple, cannot be compromised on any account,” the affidavit states. But the affidavit contradicts a report of the joint committee set up by the ministry, which said the temple could be raised to a higher level and that even the priests were not opposed to it. The court, it is learnt, expressed displeasure over inconsistencies between the ministry's affidavit and other reports on raising the temple structure to a higher level, a project already under way (see pic).

The 330 MW Shrinagar Hydro-Electric Project by Alaknanda Hydro Power Co. Ltd.(AHPCL), a subsidiary of infrastructure major GVK, had been trying to shift the Dhari Devi temple from its original site near Srinagar town where the project is under way for enhancing the project’s capacity from 200 MW to 330 MW. GVK was given the task of completing project in 2006 after its construction remained suspended for nearly 20 years due to financial crunch and other factors.

The issue triggered widespread agitation among religious groups. In July 2012, senior BJP leaders, including LK Advani, Sushma Swaraj and Arun Jaitley, submitted a memorandum to Prime Minister Manmohan Singh, requesting him not to relocate the temple. They also demanded that Uttarakhand be given 2,000 MW of free power from the Centre to cater to its needs as many hydel projects cannot be built on the Ganges, which is viewed as a national heritage.

In 2011, Anuj Joshi and Bharat Jhunjhunwala, petitioners in the case, sought directions from the high court of Uttarakhand in Nainital so that the temple is not shifted and its sanctity maintained. MoEF had issued stop work notice to AHPCL on June 30, 2011.

The Supreme Court, on April 25 this year, had ordered MoEF to verify the current status of environmental compliance of conditions by  AHPCL as stipulated in the environmental clearance of May, 1985 as well as MoEF’s order dated June 30, 2011. The verification was to be carried out by a joint committee comprising officials of MoEF and the government of Uttarakhand. MoEF constituted a joint committee which visited the project site on May 1 and 2 and submitted its report on May 4. The report said that compliance to a number of conditions is unsatisfactory.

In the affidavit, MoEF submitted that while the main project is nearly complete, the progress of catchment area treatment (CAT) and green belt development is “totally unsatisfactory”. Muck disposal arrangement, slope dressing, terracing and toe walls are yet to be completed. Only Rs 46 lakh has been spent on CAT as against an estimated amount of Rs 22 crores. The Uttarakhand forest department has stated that the greenbelt activity can be started only after impoundment. MoEF says that the wait is unnecessary since submergence areas are already known and it should be possible to start green belt work around project periphery.

Most importantly, the affidavit states that the Dhari Devi temple is of “tremendous religious, emotional and cultural significance for people all over the country…several religious leaders have under taken fast unto death on the score and several have announced that several will commit jal samadhi (death by drowning self)”. The affidavit also states that BJP leader Uma Bharati also visited the site several times and announced she will take jal samadhi if the temple was disturbed.

AHPCL had earlier proposed shifting the temple to a higher place with the help of the non-profit Indian National Trust For Art and Cultural Heritage (INTACH). An MoEF committee as well as the committee sent by B K Chaturvedi (constituted by the National Ganga River Basin Authority chaired by the prime minister) had found that the proposal to protect the structure by building a dry well around it was not feasible. 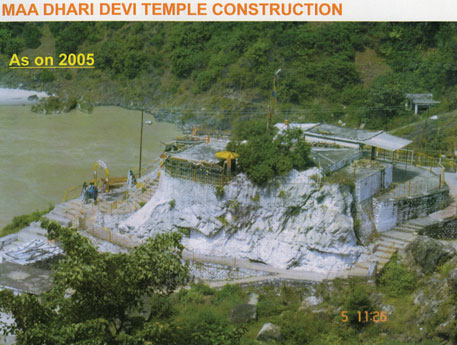 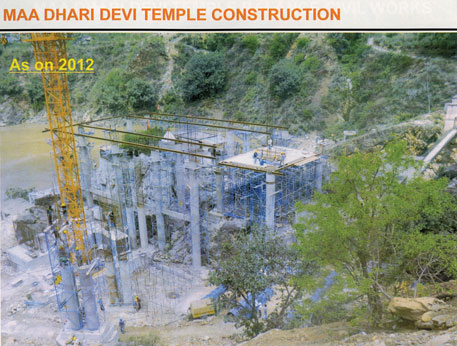 The affidavit also says that it is the strong religious belief of a large section of Hindus that not just the superstructure but the very rock on which the temple stands is where Adi Shankaracharya worshipped and the rock has immense religious significance and neither the rock nor the temple should be disturbed. “To this end, the project proponent’s (AHPCL) plant to lift the temple up on columns and preserve it under the guidance of INTACH cannot possibly be a solution to this important issue.”

The affidavit also pointed out that recent case of Orissa Mining Corporation (Vedanta case), MoEF had put forward similar arguments regarding the rights of the local tribal people to worship the Niyamgiri hill and the Supreme Court had ruled that the right to worship must be respected.

The affidavit also refers to AHPCL’s argument that they have completed a large portion of the construction work in relation to the shifting of the temple. However, this has been done at the company’s own risk and without explicit sanction from MoEF and thus does not confer any right upon the developer. MoEF has consistently pointed out over the past one year that the Dhari devi temple must be protected at its present location. Therefore, it is now for the project proponent to put forward a solution to preserve the temple undisturbed at its present location in order to avoid causing irreparable hurt to the religious sentiments of a large section of Hindus, both within Uttarakhand and outside.

It is learnt that the Supreme Court rebuked MoEF for inconsistencies between the joint committee report by MoEF and Uttarakhand government on compliance with environmental clearance conditions and Dhari Devi temple rehabilitation option and the affidavit submitted in the court. The court asked MoEF how it can disown its own committee report and indicated that the committee report would be heeded in the court and not the affidavit. The committee had reported that the priest association of Dhari Devi temple does not object to elevation of the temple. The committee report reads : “to preserve religious sanctity and character of the Dhari devi temple, a modified plan will be prepared in collaboration with INTACH, a conservation architect, the local temple samity and the representatives of GSI (Geological Survey of India). The plan should, inter alia, examine how part of rock on which the platform of the deity has been constructed, along with the rock that formed its backdrop, shall be mounted at a higher elevation in such a way that it maintains contact with the base rock from which it is raised.” While the committee report backs the B K Chaturvedi Committee report of April 2013, the affidavit dismisses its feasibility.

WP (PIL) No. 137 of 2009 by Shri Ram Lal and others vs. Union of India regarding environmental clearance to M/s Alaknanda Hydro Power Company

Assessment of cumulative impacts of hydroelectric projects on aquatic and terrestrial biodiversity in Alaknanda and Bhagirathi basins, Uttarakhand