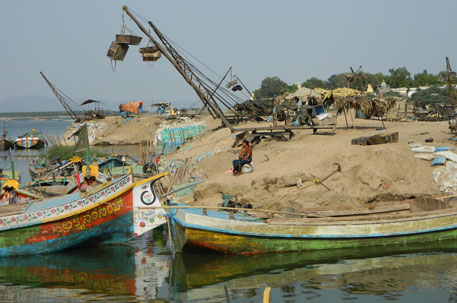 The State Environmental Impact Assessment Authority of the Union Ministry of Environment and Forests (MoEF) has granted permission for mining in 36 new sand reaches in Andhra Pradesh. These sand reaches fall in the rivers Krishna, Godavari, Pennar and Vamsadhara in seven districts.

The environmental clearance, granted on May 31, comes two months after the Andhra Pradesh High Court’s stay on sand mining and auction of sand reaches in the state with effect from April 1. The state government approached the ministry for clearance after the Supreme Court rejected its special leave petition to get the high court stay vacated. The apex court had directed the state government to get the mandatory clearance from the ministry.

“The clearance was granted after we submitted approved mining plan and environment management plan for each sand reach,” says B R V Susheel Kumar, director of the State Mines & Geology Department. This is the first time that a state is seeking environmental clearance for sand mining from the ministry and the ministry is approving it, he says. Incidentally, the seven districts where the 36 sand reaches have been approved for mining are already acutely affected by over-exploitation of river sand.

In March, the Andhra Pradesh High Court had stayed sand mining while considering a public interest petition filed by two farmers from Dharanikota village in Amaravati mandal in Guntur district. The petitioners had pointed out that there was a strong contractors-politicians-bureaucrats nexus in sand mining, and that the concerned government officials took no action while the mine lease holder in their area violated rules and regulations. Though the petition was for a particular sand reach in the Krishna river, the stay was applicable to the whole state.

The stay affected construction work in the public as well as private sector. The price of sand shot up to Rs 3,000 a tonne from about Rs 500-600, and the cost of a truckload of sand rose to a whopping Rs 30,000 from the earlier cost of about Rs 6,000. The government repeatedly pleaded in the court to vacate the stay but the pleas got rejected. The state then requested the court to at least allow the renewal of leases of the 46 sand reaches leased last year in March, which required renewal for the second year. But the court was firm and said it could not lift the stay when an order of the Supreme Court has made it mandatory for the state governments to get environmental clearance from MoEF before granting leases even for minor minerals like sand.

The high court was referring to an order issued by the apex court on February 27 this year. In that order the Supreme Court had ruled that grant of leases for extracting minor minerals, including their renewal, for an area of less than five hectares, too, should be made subject to environmental clearance from MoEF. Though the high court refused to vacate the stay, it exempted the state-owned Andhra Pradesh Mineral Development Corporation (APMDC) from the stay and asked the corporation to supply sand for important irrigation and canal projects taken up by the state government.

Subsequently, the state government filed a special leave petition in the Supreme Court in April against the high court stay. The state argued in court that it has two stringent pieces of legislation—the Andhra Pradesh Minerals Concessions Act (APMMCA) of 1966 and the Andhra Pradesh Water, Land and Tree Act (APWLTA) of 2002—in place to regulate and control  sand mining. It pleaded for vacating the stay, saying getting environmental clearance from the ministry is time-consuming, and that any delay in lifting the high court stay would result in severe crisis in the state. The apex court refused to vacate the stay, but directed the state government to secure the required clearances from the ministry.

In 2006, MoEF had issued a notification saying environmental clearance is needed from the ministry for any mining lease for major as well as minor minerals. Approval for leases having mining area between 5-50 hectares (ha) should be given by the State Environmental Impact Assessment Authority (SEIAA), and for above 50 ha, the approving authority is the Central Environmental Impact Assessment Authority (CEIAA). Both SEIAA and CEIAA function under MoEF. The state pollution control boards can give approval for those leases having  mining area below five ha.

But no state, including Andhra Pradesh, bothered to comply with this notification. Andhra Pradesh has been highlighting its two legislation—APMMCA and APWALTA. “Andhra is the only state that formulated legislation to regulate sand mining,” says Susheel Kumar. According to him, these legislation have better rules than those recommended by a core committee of the ministry in 2010.

APWALTA was enacted to protect surface and groundwater resources, promote water conservation, regulate ground and surface water use, protect land and the environment, and prohibit sand mining in areas where groundwater is overexploited. It prohibits sand mining where the thickness of the sand is below three meters. In areas where the thickness is between 3-8 metre, sand up to one meter depth can be removed; in areas where thickness is above eight metre, the law allows sand removal up to a depth of two metre.

Further, APWALTA does not allow mining within 500 metre of any groundwater extraction structure, or structures like bridges, dams and weirs, and also mining within 15 metres of river banks. It prohibits sand mining in small streams and use of heavy machines. APMMCA makes it mandatory to get the approvals of a district-level committee, headed by joint collector of the district, and also approvals from the state irrigation department, the ground water department and the river conservation authority. Leases should be granted only through public auctions.

But, in reality, all these rules are openly flouted. Reckless sand mining  has adversely affected many major rivers like the Krishna, the Godavari, the Pennar and the Vamshadhara. It has led to acute groundwater shortage and drinking water crisis in many districts.

While issuing the stay order, the high court had observed that the state government was interested only in revenue aspects, and failed to act when contractors were digging minerals beyond the notified area and the stipulated depth. Though the revenue of the state government from sand mining steadily increased from Rs 67 crore in 2007-2008 to Rs 130 crore in 2011-12, unofficial estimates say about Rs 2,000 crore worth sand is illegally extracted every year.

After the stay, there was tremendous pressure on the state government from industries, contractors, construction companies and workers’ unions to resume mining. According to an estimate by the Andhra Pradesh chapter of Confederation of Real Estate Developers Association of India (CREDAI), real estate projects worth Rs 37,000 crore and government-monitored irrigation, roads and building projects worth Rs 90,000 crore have been badly hit by sand shortage.

“With the clearance from the ministry, now the state can offer sand reaches for mining through an auction process,” says Susheel Kumar. He also says, the Mines & Geology Department has made submissions for renewal of the existing 46 reaches. According to him, now the state is in a position to tide over the sand shortage crisis created by the high court stay. Almost all the sand reaches in the state are below 50 ha so public hearing is not needed as per the ministry’s 2006 notification, he says.