MoEF finally gets unit dedicated only to the Himalayas 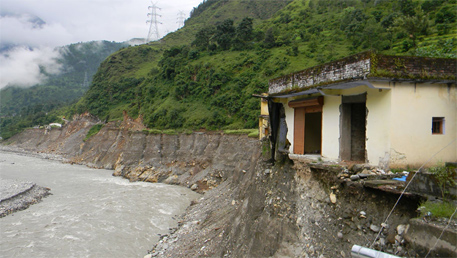 The Union Ministry of Environment and Forests (MoEF) has recently created a new division for integrated action on the policies and plans which are specific to the Himalayan region.

Though the mountain division was formally announced on September 30, 2011 by the environment minister Jayanthi Natarajan, it became functional only this year. Officials in the ministry claim that the role of the division would be significant in the wake of the devastation caused by flash floods in Uttarakhand.

The division has been created as a separate unit under the G B Pant Institute of Himalayan Environment & Development, Almora, an autonomous institute under MoEF, to cater to the Indian Himalayan Region (IHR). It will work with a limited staff and has been allocated Rs 1.5 crore in the budget for 2013-2014.

The division has decided to ensure that all planning and policy making for the mountains is done only after taking into account all big and small concerns. “The Indian Himalayan region is very distinct from other areas in the country with respect to geomorphological features, ecological fragility, biodiversity richness and its vulnerability to climate change. Hence it requires a different approach while forming policies and plans,” said B M S Rathore, joint secretary with MoEF, who looks after the division in MoEF. The division will concentrate more on creating awareness and knowledge and on policy and research than on direct field implementation, he added.

The need to look into the current state of the Himalayan region and address its issues had been highlighted by many task forces, commissions and expert reports including the National Action Plan for Climate Change 2008 and Himalayan Chief Minister’s Conclave 2009.

Coordination with other institutes a priority

The Mountain Division will also focus on coordinating with different agencies associated with the Himalayas. “We want to improve cross-sectoral and inter- ministerial working and ensure that we work in collaboration with concerned ministries that look after issues relevant to sustainable development of Indian Himalayan region,” added Rathore.

The division will work not only at the national level, but also help with information sharing and increase interaction with other countries with Hindu- Kush mountain cover, especially through the International Centre for Integrated Mountain Development (ICIMOD) in Kathmandu. This is in order to ensure effective formulation and implementation of plans and policies and to maintain constant coordination within various associated institutions.

Welcoming the move, P P Dhyani, director and scientist at GBPIHED said, “Mountain Division will broaden the vision and scope of the GBPIHED and will help the ongoing research works on Himalayas. The division will not undertake any researches on its own but will formulate policies based on the researches it has been supporting.”

'Some key issues kept out of the ambit of division’

Jayanta Bandyopadhyay, environmentalist and former professor at IIM-Calcutta, however, feels that a few key issues have been left out from the mandate of the Mountain Division. “There is definitely special focus on the Himalayan region and it is a good step qualitatively. But to what extent will the problems in the region will be taken care of is debatable,” said Bandyopadhyay. “The fragile ecosystem can sustain only a limited number of human beings. The issue of monitoring the resident population has not been addressed and the burden of too many people may destroy it. Population explosion poses a major threat to the environment and needs immediate action. But the politicians do not want to address problem issue,” added the environmentalist.