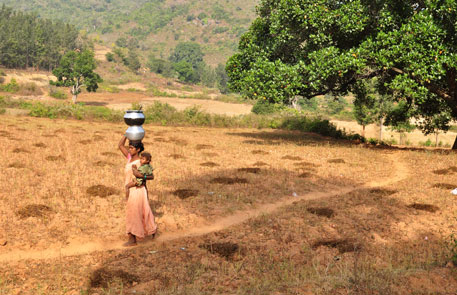 The high-level committee set up by the Union Ministry of Environment and Forests (MoEF) to study the socio-economic and ecological impacts of the proposed bauxite mining in Andhra Pradesh’s Visakhapatnam district has submitted its final report  favouring mining. The committee concludes mining will not have any significant negative impact on the ecology. At the same time it recommends settling all claims under the Forest Rights Act and getting approval of the Andhra Pradesh Tribes Advisory Council before going ahead with mining plans.

The four-member committee, headed by former director general of forests J C Kala, was set up in October last year as the proposed mining plans ran into controversy. All the bauxite deposits fall in the tribal areas protected by the Fifth Schedule of the Constitution; they also happen to be in the ecologically sensitive Eastern Ghats which has a rich biodiversity. Environmentalists have long been pressing MoEF to declare the region a biosphere reserve. There has been strong opposition from the tribal organisations, political parties and non-profits against the mining plans.

The four-member committee was asked to study in detail whether the proposed mining will have any negative effect on the social and economic well being of the local communities. It was also asked to assess the effectiveness of the remedial measures stipulated in the stage one forest and environmental clearances issued by the ministry in 2007 in containing the possible impacts of the mining on the environment and wildlife. It was also asked to assess the provisions in the memorandums of understanding (MoUs) for safeguarding public interest.

Since the mining sites fall within the Fifth Schedule tribal areas, and the  Supreme Court’s Samata Judgement  of 1997 prevents any private company from owning or leasing land for mines or industry in the Scheduled Areas of the state, it was decided that the government–owned Andhra Pradesh Mineral Development Corporation (APMDC) would undertake mining and supply bauxite to the refineries set up outside the agency area.

The  committee was unable to come to a conclusion about the socio-economic impacts of mining on the lives of the tribes because it could not interact with the tribal communities living in the mining area. During the first visit in Araku region by two members of the committee in October last year, a bandh was called by Maoists. During the second visit in December last year, a three-day bandh was observed by tribal organisations and political parties. The committee could make only an aerial survey of the Jerrela groups of deposits.

Though the committee could not interact with the tribes, it observes that the development efforts by the government in the past could not make any significant impact in the Schedule Five areas in the district. The tribes are still extremely backward with low literacy rate (34.34 per cent) and high infant mortality rate of 194 and high maternal mortality rate which goes up to 1,030 in some primary health care centre areas. Educational and health care facilities are poor. The school drop out rate is also very high, especially at the elementary and high school level. Only 26 per cent of the students study beyond tenth class, notes the committee.

As for the livelihood, people at proposed mining sites of Chintapally, G K Veedhi, Ananthagiri areas and Araku have been agriculturists for several generations. They have been growing rice in these fields and banana on the bunds. In several other fields, tribals have been growing turmeric, chillies, fruits, tomatoes, cabbage, cauliflower and potato of improved varieties and selling in Visakhapatnam and other towns.

Despite observing all these facts and considering all the representations by various organisations, the committee, without making any solid recommendation to safeguard the livelihoods of the tribes, make a general statement: “the vicious cycle of poverty leading to ecological degradation and in turn more poverty can be broken only through tribal  development in the area. This will also free them from the influence of Maoists.”

The committee hints the solution to the backwardness is mining. It also talks about the tribal people’s desire to merge with the mainstream and their seeking employment opportunities. During their interaction on December 22 with the public in Visakhapatnam city, which is far away from the tribal areas, the committee members had categorically said that mining would bring development to backward tribal areas. “ No doubt, mining to some extent is bound to come in conflict with conservation, but at the same time poverty and illiteracy was found taking its toll through forest degradation and rampant shifting cultivation. It is obvious that people whose daily survival is at stake cannot respond to the call for conservation.”

Mining lease area, approach roads and conveyor corridors for transferring the mined ore together will cover 2,000 ha of forest area. In the 10 km buffer of the mining sites in Araku region, the forest cover is 23,138 ha. While the environmentalists point out the blasting of the hilltops and clearing a large forest cover will cause irreversible destruction of ecologically sensitive Eastern Ghats, the committee is of the opinion that there are no eco-sensitive areas where mining is proposed. No vegetation is seen on the hilltop.  Slopes have been cleared and streams have been diverted  for cultivation, and there are no hamlets in the mining area, and there are only scattered habitations, that too, about one to two kilometres from the foot of the hills, observes the committee.

Interestingly, the high level committee is parroting what APMDC says about  air, water and noise pollutions. The surface water in the area is not fit for drinking because it has higher turbidity, claims the committee.  “There is likelihood of natural drainage pattern being disturbed and affecting the water flow of certain streams. These streams or nallahs are local drains only and mining will not hamper the regional drainage or rivers,” observes the committee. The fear expressed in various quarters regarding the impact on ground water was not found correct, the committee asserts, while adding in most places the ground water is 100 metre below land-surface, while the working depth of mines is less than maximum 50 m. The committee even goes to the extent of saying “ the accumulation of water in pits will help to recharge the storage capacity of ground water.” 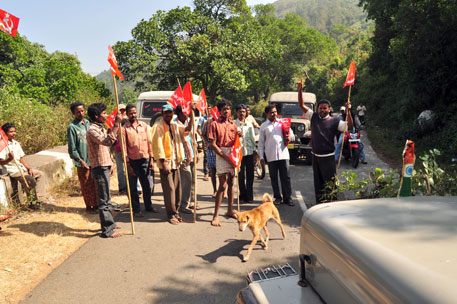 The committee maintains that fear of environmentalists about rare and endangered species getting destroyed due mining and pollution is baseless. “It is observed during the aerial survey that much of the (proposed) mining area and surrounding forests which are already destroyed by cultivation in the past, would hardly harbor the rare species of plants and animals.” And if there are one or two species that would be affected, they migrate to some congenial areas rather to remain in the harsh mining zones, notes the report. It points out that a lot of compensatory afforestation is already proposed by APMDC. Further, it notes that transportation of ore is proposed much above the coffee plantation on lower slopes and cultivation.

Since the mined ore is proposed to be transferred by lorries, to minimise the air and noise pollution and also not to disturb villages, closed conveyors or rope-ways are preferable, suggests the committee. An interesting suggestion made by the committee is that  for onward transportation, companies should employ only tribals as lorry drivers so that “the fear of HIV/AIDS can be taken care of to a great extent.”

According to the surveys conducted by the rural development department, the state of land records is in very poor state, the report notes. Some tribes with land have no title deeds while those given titles under the state's land assignment programme were not shown their land. Large areas in Chitapally region, where the Jerella deposits are located, are yet to be surveyed.

Further, under the Forest Rights Act, 39,322 claims out of 52,986 claims in Visakhapatnam were approved by the district-level committee by October 2011, covering an area of 75,911 ha. Of this, in 35,780 cases, 71,328 ha has been distributed. Claims of 13,953 persons are yet to be settled, notes the committee. The committee recommends settling of all the claims before giving second stage forest clearance.

The  high level committee concludes by saying that even though India has 16 per cent of  the world’s total bauxite reserves, the country’s contribution to total aluminium production in the world (35 million tonnes ) is a mere 3 per cent (one million tonnes). The projected demand for aluminium is expected to rise to 8 per cent in next two years , and hence, according to the committee, “there is a demand for development of deposits in Andhra Pradesh to  supply raw bauxite to the value added units coming up in backward tracts of state.”

While the MoEF panel has pushed for mining in Visakhapatnam's tribal areas, the Union ministry of mines has decided to return mining proposals to the state government for further consideration. This was announced by minister of mines with independent charge, Dinsha Patel, in the Lok Sabha on May 18.